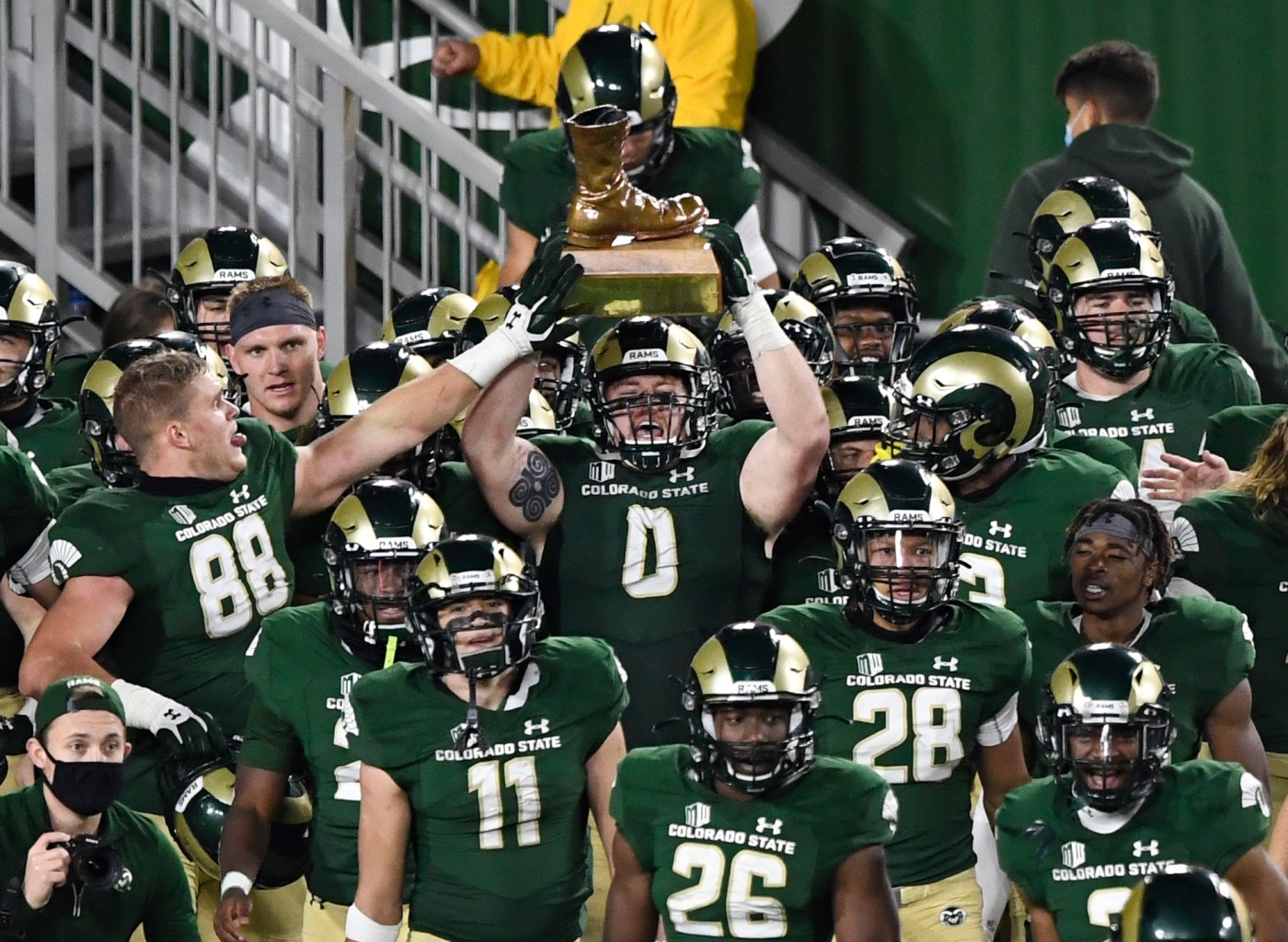 FORT COLLINS — The long wait is finally over. The Bronze Boot belongs to Colorado State.

CSU defeated Wyoming, 34-24, on Thursday night at Canvas Stadium for their first Border War victory since 2015. Rams players rushed to the visiting sideline postgame to take back the iconic rivalry trophy. Their outpouring of emotion punctuated a signature victory for CSU head coach Steve Addazio in just his second game leading the program.

“The boot belongs in Fort Collins,” CSU tight end Trey McBride said. “Going out there and getting that boot — holding it, kissing it, loving on it — it’s just exciting to have it back.”

Wyoming quarterback Levi Williams, on his second throw of the night, was intercepted by CSU defensive back Marshaun Cameron — who ran it back 30 yards for a touchdown. On the Cowboys’ next possession, facing third-and-long, Cameron strip-sacked Williams and the football was recovered by defensive tackle Manny Jones. The Rams’ offense capitalized immediately with a 29-yard catch-and-run to the end zone from McBride.

CSU, after a long missed field goal, led 14-0 after the first quarter.

“We had talked about creating turnovers all week,” Cameron said. “The first thing in my mind was to get the ball back. I saw the opportunity and I took it.”

The Rams made a change at starting quarterback on Thursday with senior Patrick O’Brien getting the nod over first-year graduate transfer Todd Centeio, who started in the Rams’ previous loss at Fresno State. O’Brien, a former Nebraska transfer, touts the reputation for a big arm.

Also Check:  Kiszla: As Nuggets got Clawed in loss to Clippers, Nikola Jokic just stood there and let it happen

He delivered against the Cowboys. O’Brien completed 18-of-26 passes for 255 yards, two touchdowns and zero interceptions.

“Patrick competed really hard and did a good job,” Addazio said. “He was able to manage the game very well and had some big throws. He had good poise.”

“Dante’s vertical speed was a huge factor in the game,” Addazio said.

CSU’s lead grew to 17-0 in the second quarter with a chip-shot field goal from kicker Robert Liss.

Suddenly, Wyoming’s offense woke up from its slumber with consecutive drives capped by rushing touchdowns. The Rams fired back when O’Brien snuck into the end zone midway through the second quarter to maintain a two-possession advantage at halftime, 24-14.

CSU’s defense bent, but didn’t break in the third quarter as Wyoming reached the Rams’ 5-yard line following a 6-minute drive. Yet the Cowboys were stuffed on third down and settled for a field goal. Then CSU’s offense did its part to widen the gap.

O’Brien threw a 38-yard strike to McBride over the middle — a second touchdown for the senior tight end — to take a 31-17 lead. Wyoming added a touchdown midway through in the fourth quarter on a Williams rushing score, but it was too little, too late. O’Brien made several big throws down the stretch to drain the clock and Liss connected on a 48-yard field goal to secure a Rams’ victory.

“It’s the best energy I’ve felt since I’ve been here,” O’Brien said of the postgame locker room celebration. “The boot has been gone from Fort Collins for a long time. It’s really special for me.”

CSU’s reputation for stumbling in rivalry games, a significant reason for coach Mike Bobo’s 2019 dismissal, has been temporarily alleviated under Addazio. The Rams snapped their combined 12-game losing streak against CU, Air Force and Wyoming.

“We beat our rival and we beat them with physicality,” Addazio said. “Our team showed a tremendous amount of energy, toughness and courage. … We’re still a new program. We’re still developing. I’d like to think that we’ll continue to improve.”

On Thursday, the stands were empty at Canvas Stadium to comply with Larimer County health guidelines amid the coronavirus pandemic. In 2018, the Border War drew 32,125 in attendance to Fort Collins.