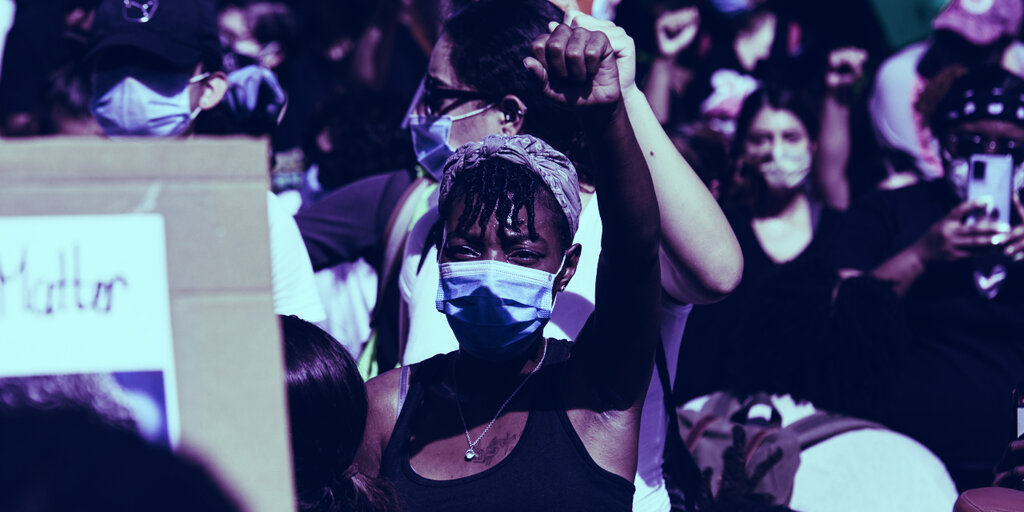 The Giving Block today announced the launch of a Crypto for Black Lives donation campaign, encouraging cryptocurrency holders to donate towards several nonprofit organizations with matching funds provided through Gitcoin.

The drive was announced in the wake of global protests against police brutality and injustice towards black Americans, following the police murder of George Floyd in Minneapolis on May 25.

“We’ve had donors reach out wanting to support nonprofits addressing the civil rights crisis, so we quickly mobilized to onboard nonprofits in this space so they could accept crypto,” The Giving Block co-founder Alex Wilson told Decrypt.

Users can donate a variety of cryptocurrencies, including Bitcoin, Ethereum, DAI, Litecoin, ERC-20 tokens, Bitcoin Cash, and Zcash. The Giving Block has waived its subscription fees for participating nonprofits, and the company has also taken the #CryptoForBlackLives pledge established by Emerging Impact CEO Robert Greenfield.

Gitcoin is currently providing matching funds up to $25,000 via a community grant, but Wilson said that they’re hoping to boost that tally to $500,000 by bringing in more matching donors. The Giving Block previously partnered with Gitcoin for the #cryptoCOVID19 campaign and raised more than $1 million in total donations, which they aim to do again for Crypto for Black Lives.

“Our hope is to ultimately reach $1 million like we did for COVID,” said Wilson.

Decrypt recently examined the crypto community’s response to the Black Lives Matter movement and protests against police brutality. According to Greenfield, there’s still much more that crypto firms can do to improve equality across the industry.

James Donald
James Donald writes for the Crypto section of Select News 91. He is an economic expert with a special interest in the unregulated currency system. He believes that the future of the planet lies in the unregulated system and that cryptocurrency is only beginning its journey. Whether his prediction is true or not, his skills certainly show his ability to analyze trends and dissect policy decisions. His column talks about the various cryptocurrencies failing and succeeding in a market that is nowhere near saturation.

Analyst: Ethereum Bulls Still In Control at $240, Even Without “Real” Buying

After passing over $ 250 on June 1, Ethereum saw a hard rejection on June 2. The asset dropped from over $ 250 to $ 225 in minutes, crushed when Bitcoin fell a similar amount on top exchanges. Despite this sharp decline, analysts claim that bulls still maintain control of the asset. Related Read: Crypto […]

Telegram, the popular mobile messaging platform, has officially left its crypto and blockchain project, the Telegram Open Network (TON). The company’s founder and CEO, Pavel Durov, made the announcement Tuesday. The fateful TON project, which never got off the ground, is being shut down after Telegram’s long legal battle with the U.S. Securities and Exchange […]

Top Crypto Analysts Pin Date on Next Bitcoin Breakout As BTC Hovers Near $9,000

A closely-followed crypto analyst says investors looking for Bitcoin (BTC) to take off right away shouldn’t hold their breath. The pseudonymous crypto trader Dave the Wave tells his 32,000 Twitter followers that the width of the Bollinger bands suggests that the current consolidation phase of the king coin will likely continue until the last quarter […]

Add Select News 91 to your Homescreen!