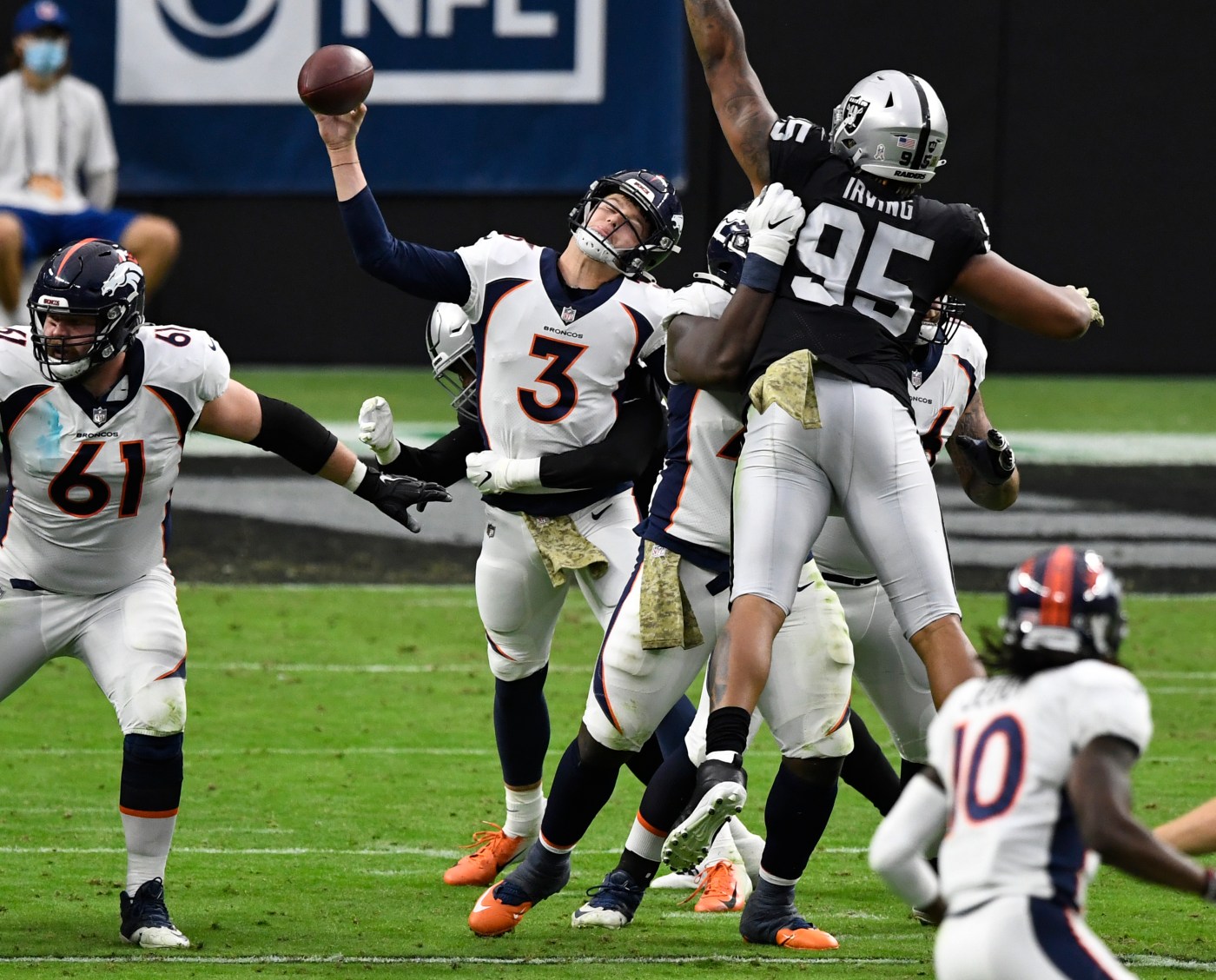 LAS VEGAS — Somehow, the Broncos were in a position to take a lead into halftime Sunday against the Las Vegas Raiders despite poor field position, an inability to contain running back Josh Jacobs, a non-existent pass rush and more special teams foibles.

But two plays both derailed the Broncos’ chances and summarized the state of their broken offense.

Trailing 10-6 with first-and-goal from 5, quarterback Drew Lock’s designed run to the left for a touchdown was negated by a needless holding penalty on tight end Noah Fant. Moved back 10 yards, Lock tried to throw a fastball over the middle to receiver Jerry Jeudy, but safety Jeff Heath cut in front of him for the back-breaking interception.

It was the Broncos’ last and only chance to make their first trip to Vegas successful or interesting.

Las Vegas turned a four-point halftime lead into a 37-12 rout that showed the Broncos just aren’t chasing Kansas City in the AFC West. They now look way up at the Raiders (6-3).

Denver is 3-6 for the fourth consecutive season. And now it can’t stop anybody, having allowed at least 30 points in four consecutive games for the first time since, gulp, 1968. But that is on the entire operation, not just the defense.

“The second half was unacceptable,” coach Vic Fangio said. “We didn’t play or coach good enough to stay in a game that was a four-point game at halftime.”

Didn’t play good enough: The Broncos were minus 5 in turnover differential for the first time in exactly five years (loss to the Chiefs). … They committed seven penalties, many of the costly variety (chiefly the one on Fant). … They were gashed for 203 yards rushing. … And Lock is regressing.

The Broncos are steamrolling toward a fifth consecutive year out of the playoffs. They aren’t good enough and their schedule is too tough to think they can have some kind of rapid turnaround.

That leaves Lock’s development as the last remaining storyline.

Over the next seven games, the Broncos must decide if Lock is their guy moving forward. Can he be smarter with the football? Can he spark a productive first half? Can he recover a confidence level that should be shattered?

“There’s always time (to save the season) if you have a mindset that’s good and positive,” Lock said. “Obviously, I have a very real mindset. I realize it’s wasn’t very good today and it hasn’t been very good the past couple weeks. It doesn’t get better if you dwell on it.”

Lock may not want to dwell on it, but realistically, that’s the only way for him to fix his mistakes. Watch the video. Talk to coaches. Discuss with his receivers. Every type of conversation should be on the table. Everything but sitting Lock is an option.

Benching a healthy Lock isn’t the answer because it would prevent Fangio, general manager John Elway and offensive coordinator Pat Shurmur more opportunities to see if he can be a part of the solution. In turn, Lock must be more on-point to survive his first major dose of NFL adversity, the same with his young supporting cast.

Lock, who has six touchdowns and 10 interceptions this season, posted a career-worst 37.3 passer rating. He threw interceptions in the first, second and fourth quarters. The only reason why he didn’t throw one in the third quarter? The Broncos ran only four plays (outgained 142-1) as the Raiders blew things open.

“We’re committed to Drew and the more he can play, the better he’ll be,” Fangio said. “He has to fight through this, like most young quarterbacks (have to) do at some point of their career and we’re going to continue to play him.”

Worrisome, though, is the nature of Lock’s interceptions. He airmailed receiver KJ Hamler (degree of difficulty: low). He threw it right to Heath in the end zone (same). He threw it right to defensive end Carl Nassib (ditto). And he didn’t put enough air on a pass that was picked off by linebacker Nick Kwiatkowski (one-handed catch, so a nice play).

Lock wasn’t getting intercepted because of leaky pass protection, miscommunications and passes going through his receiver’s hands and into the opponent’s.

“Obviously, it’s very much of a concern,” Fangio said. “You can’t win turning the ball over that much. We’ve got to do a good job of evaluating why we’ve thrown those interceptions and what we can do to help him.”

Asked how Lock’s confidence can be rebuilt, Fangio said: “There’s only one way to rebuild it: Go back to work. Drew has to start experiencing good play. We’ve got to devise our passing game and our running game to where he can be more successful. I see a lot of good throws by him and a lot of good catches by our receivers, but we have that play or two when we throw a pick or stop a drive. We need to be more consistent and more efficient.”

Consistent and efficient. Fangio has entered Broken Record Territory, where he has run out of answers so he goes back to the previous well. Same with the players.

“Look at who we got — we’ve got some players here,” inside linebacker Josey Jewell said. “We have to stay positive. Yeah, we haven’t had the best start, but all we can do is try and fix the problems we have. There’s no room for negativity and why have it when it isn’t going to make you better?”

True, but being realistic can also sound negative. Despite all the talk about better players, better schemes, better coaches and better everything, the Broncos are smack dab at the same point they were last year (three games under .500 and searching).

Unfortunately, this is the Broncos’ current normal.