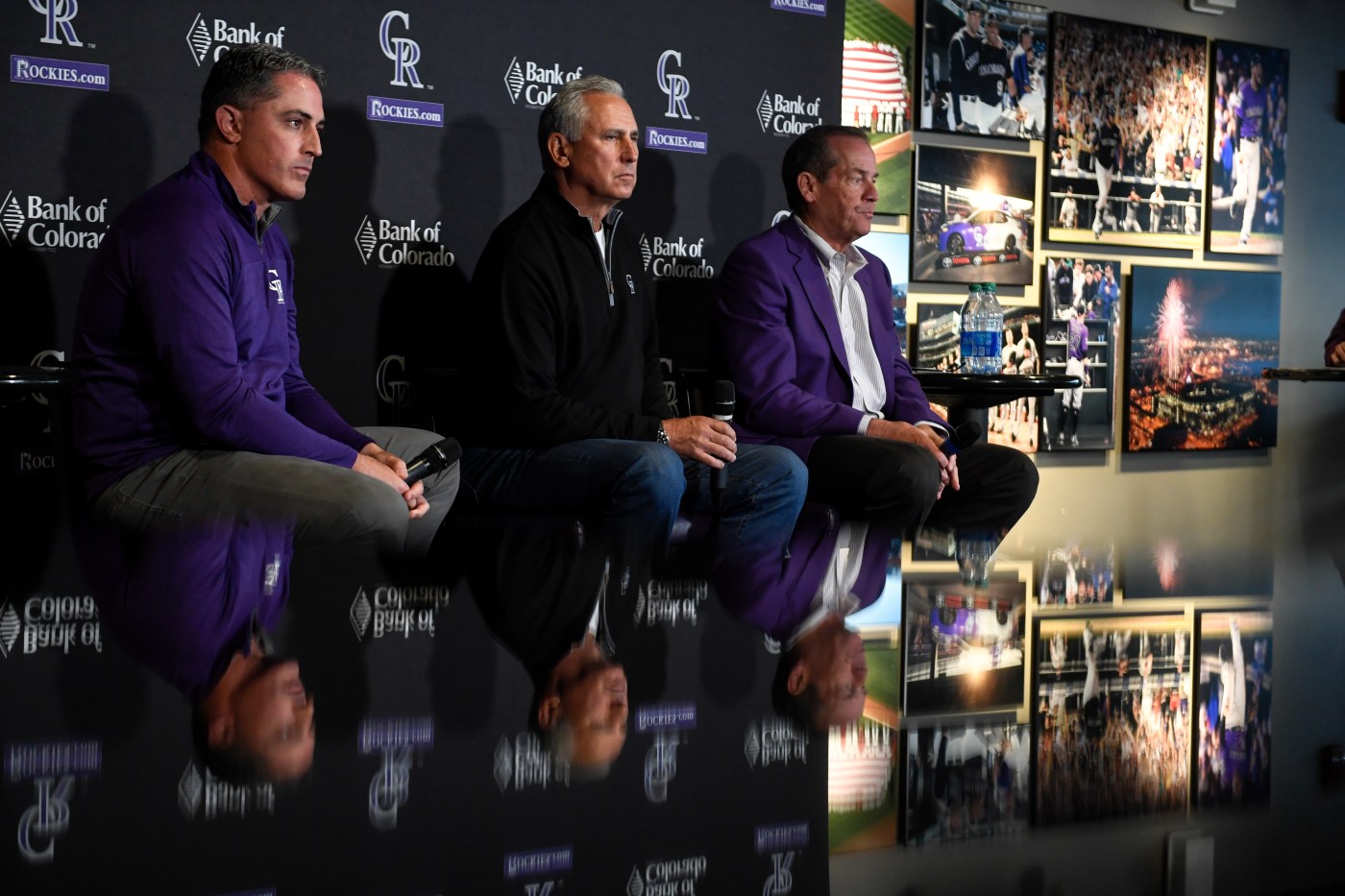 Pose a Rockies — or MLB — related question for the Rockies Mailbag.

Love your work, Patrick. In an alternate reality where Jeff Bridich isn’t general manager for life, should the Rockies consider hiring Jeff Luhnow, the former Astros GM who oversaw their burn-it-all-down approach that eventually resulted in a (tainted) World Series championship?

Greg, there is no way the Rockies would ever hire Luhnow and I’m not sure anyone else will in the near future. Although Luhnow recently denied — again — that he had anything to do with the sign-stealing scandal. I don’t believe he’s telling the truth. How does a GM not know about something like that? And if he didn’t know, he should have.

OK, off my soapbox and back to your main point. You call it the “burn-it-all-down approach,” while I call it tanking. I don’t think the Rockies would ever go as low as the Astros did, in large part because owner Dick Monfort still wants fans to come to Coors Field. The Astros lost more than 100 games in three consecutive seasons: 106 in 2011; 107 in 2012; and 111 in 2013. I don’t see that happening here.

Having said that, could there be a rebuild in LoDo? Sure, especially if the Rockies lose both Nolan Arenado and Trevor Story over the next year. Then again, with German Marquez, Antonio Senzatela and Kyle Freeland, the Rockies believe they have three solid starters to build around. The bottom line: the Rockies’ way will not be the Astros’ way.

By the way, if you want to read a really compelling story, consider this: “The author of ‘Astroball’ reconsiders the Astros and the dark side of ruthless efficiency,” by the Washington Post’s Ben Strauss.

Patrick, after a close, careful, observation of the Rockies since 1993 as an original season ticket holder, I have come to the conclusion that the Rockies franchise is the Talking Heads concert film and album “Stop Making Sense” come to life. The lyrics on that album perfectly match. “Once in a Lifetime”: 2007 World Series. “I can’t seem to face up to the facts”: Failure to appreciate analytics. “I got a girlfriend that’s better than that”: Any prospect the Rockies have ever developed. “Stop making sense, making sense”: Signing Daniel Murphy after the failure of Ian Desmond. “My house is out of the ordinary”: Continually pumping up the Coors Field experience. “Burning down the house”: The Nolan Arenado-Jeff Bridich mess. I could go on. Prove me wrong!

Jim, I’m not going to prove you wrong. And, normally, I don’t include “rants” such as yours in my mailbag. However, you went to great effort and showed some real creativity, so here it is. Plus, as an original season ticket holder, your voice matters.

It appears as though there will be no hot stove season for the Rockies. Owner Dick Monfort all but came out and said that he was slamming his wallet shut in his letter to season ticket holders. Why do we keep doing this to ourselves, is there any hope for the future of this franchise?

Jackie, for those who missed Monfort’s letter, they can find it in my recent story.

To be fair to Monfort, I don’t think said he was “slamming his wallet shut,” but it does seem clear that the Rockies are not going to spend much money in free agency. Examining the various lists of the top-50 free agents available by sites such as ESPN, Sports Illustrated and Baseball Trade Rumors, the Rockies were not included as a projected landing spot for any of those top 50 players.

Financially, it would be very difficult to trade Nolan Arenado due to the amount of money he’s owed. Would the Rockies consider taking on some of the money to facilitate a trade or is that out of the question?

Perhaps, but the Rockies would have to get a solid deal in return, including a veteran player who can help now, as well as prospects.

But this situation is complicated.

If the Rockies traded Arenado, it would likely be for the following reasons:

1. The club doesn’t want to dance around the rift between Bridich and Arenado anymore, believing it’s time to move on.

2. The club believes Arenado will opt out of his deal after 2021 and it wants to get something for its star third baseman, rather than see him leave with nothing to show for it.

4. At this point, the team wants to invest in shortstop Trevor Story, who’s scheduled to become a free agent after 2021.

Here are some reasons why a trade would not happen:

1. Giving the new financial reality of baseball, teams will be hesitant to pick up Arenado’s salary, even if the Rockies paid part of it.

2. Arenado has a full no-trade clause, so he can nix a deal if he doesn’t like the destination.

3. Because of baseball’s new financial landscape, Arenado will choose not to opt out of his contract.

As I said, it’s complicated.

Commissioner Rob Manfred has been bad for baseball. Why is he destroying what was already a great game to make a few extra bucks for owners? His decisions I think have turned baseball purists away from the game. What are your thoughts on what he wants to do going forward with expanded playoffs, the DH and extra-innings rules? Thanks for the coverage.

Jim, I’m not a big fan of Manfred’s either. I don’t think he’s a true fan of the game, and you’re right, he is beholden to the owners and the money that’s at stake. That being said, I do think he’s exploring ways to speed up the game, though it’s not working so far.

Anyway, I wrote about much of what you asked about in a recent Sunday column, so please give it a read.

I know the whole Dick Monfort doesn’t like change mantra that serves as an explanation as to why the Rox don’t shake up the front office. But I also wonder if there isn’t something else at work here. Back when Jeff Bridich was hired, I remember wondering who else, if anyone, was interviewed. As insular as the organization is, it seems to me that Montfort, and the team as a whole, do not have many close friends throughout baseball. Does Monfort have any other owners he can bounce ideas off, or ask for personnel suggestions? The same question for Bridich on the GM level. The doesn’t like change cloak may actually be “I’m in a rut and I don’t have any friends in the business to turn to for advice.”

Dave, I do think the Rockies are an insular organization, and I’ve said multiple times that I think they should hire someone outside of the organization as team president.

But I don’t agree with your supposition that the team doesn’t have “close friends throughout baseball.” Monfort does have relationships with other owners and I have never heard of any owner saying anything bad about Monfort.

It’s also an incorrect assumption that Bridich doesn’t have workable relationships with other GMs. He does. He also works well with some agents, and not so well with others. But that’s the case of all GMs.

I think your scenario is overblown.

Hi Patrick, first thank you for excellent coverage of the Rockies during a very difficult season. I am wondering if Nolan Arenado’s frequent comments about wishing to play for a perennial contender has an impact on his teammates? Thank you.

Allen, that’s a fair question. In the past, when Arenado expressed his dissatisfaction with the Rockies’ performance, I wondered if some of his teammates took offense. Off the record, I’ve asked some of his teammates that question and they all said no. The feeling in the clubhouse is that Arenado’s work ethic and desire to win give him a license to speak up. I don’t get the sense that Arenado’s teammates resent him.

Who is being held responsible for Justin Turner entering the field to celebrate the World Series win after he tested positive for COVID-19? Will punishments be rendered? Will apologies be announced?

Judy, from everything I’ve read, it was Turner’s decision to join the celebration. He wasn’t on the field for the official trophy presentation but later emerged to celebrate with the team.

“Turner was placed into isolation for the safety of those around him. However, following the Dodgers’ victory, it is clear that Turner chose to disregard the agreed-upon joint protocols and the instructions he was given regarding the safety and protection of others.

“While a desire to celebrate is understandable, Turner’s decision to leave isolation and enter the field was wrong and put everyone he came in contact with at risk. When MLB Security raised the matter of being on the field with Turner, he emphatically refused to comply.

“The Commissioner’s Office is beginning a full investigation into this matter and will consult with the Players Association within the parameters of the joint 2020 Operations Manual.”

At this point, MLB has not announced any actions and Turner has not spoken publicly about the matter.

I wouldn’t make that trade and I can’t imagine the Rockies would either. Tapia has a huge upside and I think he’s going to keep improving and I still believe Gray has potential.

Sanchez is coming off a bad season, though he did it 10 homers for the Yankees. He went from being an everyday starting catcher to being benched in September as he tried to find his swing. He started just two of seven playoff games.

German is talented, no doubt, but he has a lot of baggage and I doubt the Rockies would take him on. German was placed on administrative leave on Sept. 19 last year while MLB investigated an alleged domestic violence incident involving his girlfriend. German was reinstated from the restricted list by the commissioner’s office in early October after completing an 81-game suspension.