Democratic nominee Joe Biden has won the US presidential election. The Trump era is over.

And thus the futures contracts on FTX—essentially bets on the US election—are close to concluding. The contract for $BIDEN, which expires at $1, is worth $0.993 just moments after the election. There’s $466,910 in open interest on this bet.

Trump’s contract sunk in turn, down from $0.04 to $0.007. In other words, a bet on Trump’s presidency is near worthless. Traders stand to lose $11.3 million on the Trump contract.

But the contracts shall only expire when Biden is inaugurated on 20 January 2021… unless there’s any pushback from the ‘faithless electors’. The handover is scheduled for February.

Trump contests Biden’s victory. He has long made baseless claims about electoral fraud, arguing that mail-in ballots are fraudulent and that Biden is stealing the election.

“We all know why Joe Biden is rushing to falsely pose as the winner, and why his media allies are trying so hard to help him: they don’t want the truth to be exposed. The simple fact is this election is far from over,” Trump said in a statement today.

“In Pennsylvania, for example, our legal observers were not permitted meaningful access to watch the counting process.  Legal votes decide who is president, not the news media.”

Trump is gearing up for lawsuits to take on Biden in the courts.

“Beginning Monday, our campaign will start prosecuting our case in court to ensure election laws are fully upheld and the rightful winner is seated,” he said. The “rightful winner” would, of course, be Trump. “This is the only way to ensure the public has full confidence in our election.”

But the courts are not sympathetic to his unsubstantiated claims of election fraud. Two court cases have already been rejected.

Yesterday, FTX launched a TRUMPFEB contract, which expires if Trump is still president in February. This, too, is nearly worthless. It fell from $0.14 before the announcement to $0.078 shortly after the announcement that Biden has won the election.

Crypto traders managed to correctly call the presidency. They haven’t wavered on the handover. 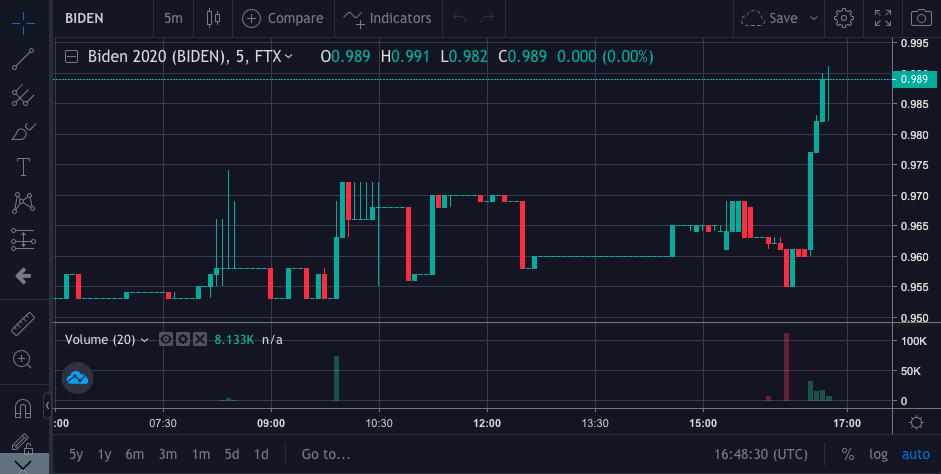