How much does offense miss Courtland Sutton? 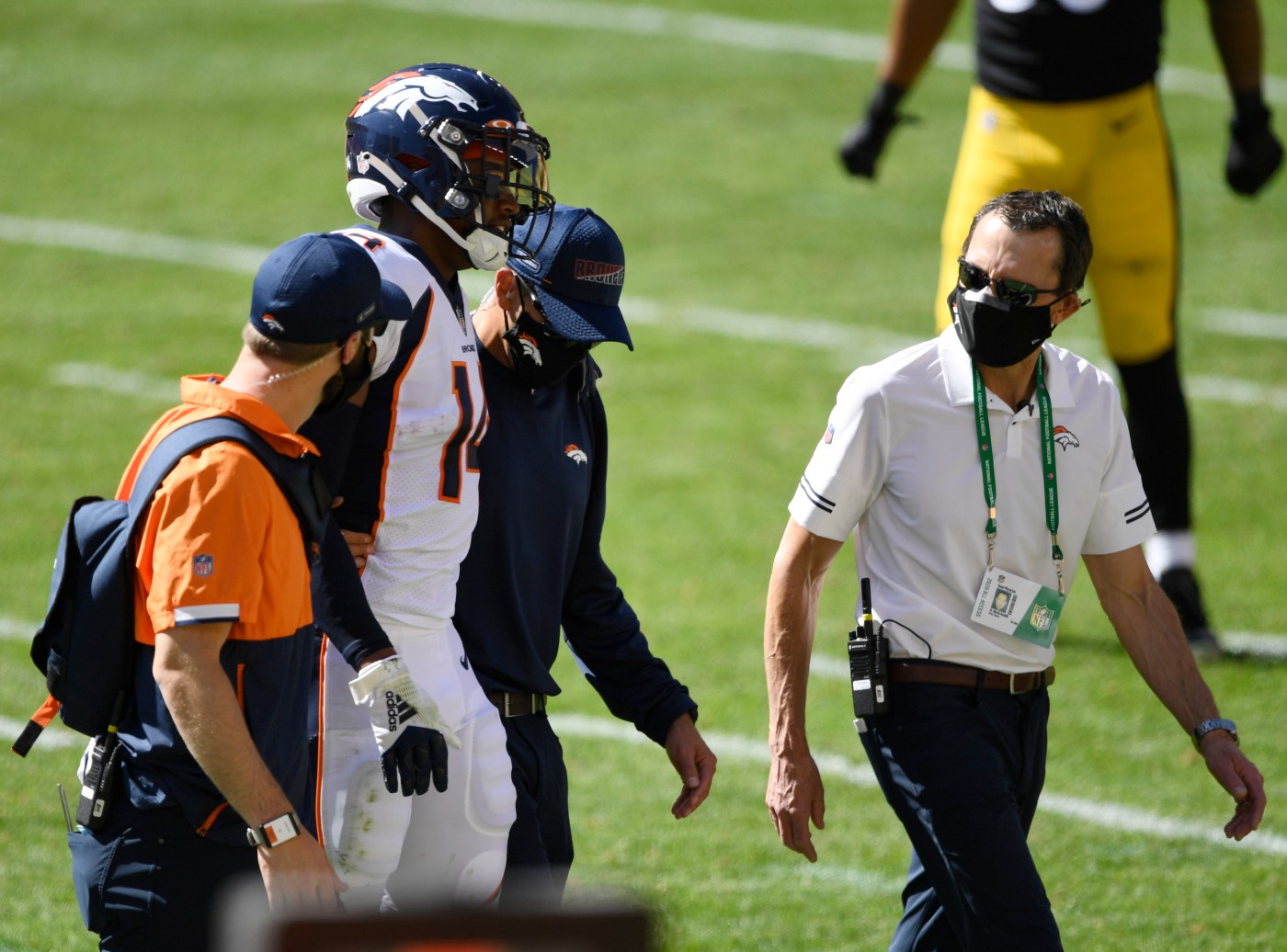 Do you think Jerry Jeudy is being held back by quarterback play, elite secondaries, or both?
— Daniel, Cresskill, N.J.

I don’t think Jeudy has been held back at all considering how tough the transition to the NFL generally is for rookie receivers. Through seven games, he has 23 catches for 359 yards and one touchdown.

That said, the quarterback instability until Drew Lock’s return probably did play a part. But Sunday’s win over the Chargers could be the lift-off point for Jeudy.

Jeudy was targeted 10 times (season high) and caught four passes (second-most this year) for 73 yards (season high). Seven games into the season, the picture may be crystallizing for Jeudy in terms of routes the Broncos want him to run and the coverages he is seeing on every play.

Do the new COVID protocols regarding fans in the stadium change the mindset of a player when they enter on game day vs last season when everything was normal? How has that affected players’ game day mentality?
— Maria England, Phoenix

Interesting question. I talked to a few Broncos players before the season about the potential for having no fans in the stadium.

The consensus: It will be more bizarre on the road, where the boos actually pump up some players, but once the game starts, it will be business as usual (home and away). Through eight weeks of games, I’ve found that to be the case aside from home-field advantage being minimal.

For teams on the road, they don’t have to mess with silent snap counts and don’t have to worry about crowd noise-producing false starts.

One of Drew Lock’s struggles this season has been hitting receivers down the sideline, especially in jump-ball situations. It seems like he definitely misses Courtland Sutton’s size, physicality and catch radius. Now that Sunday’s win keeps Denver very much alive for a wild card, do you see the possibility of the team trying to add another big-bodied receiver before the trade deadline? Are there any realistic candidates?
— Steve, Forks

Losing Sutton impacted the offense as much as the defense losing outside linebacker Von Miller … and maybe more. Miller’s absence has been felt, but Bradley Chubb is returning to his 2018 form (5 1/2 sacks in the last four games).

Minus Sutton, though, the Broncos lost their best receiver and best offensive play-maker, capable of turning every iffy pass into a touchdown or third-down conversion.

Tim Patrick is big target, but he’s more of a perimeter receiver and does his best work outside the red zone.

The trade deadline is Tuesday. On Monday, coach Vic Fangio said he hasn’t had any trade conversations with general manager John Elway.

As of Monday night, the names in the NFL rumor mill include Cincinnati’s John Ross and the New York Giants’ Golden Tate. The Broncos should just stand pat, hope Jeudy and fellow rookie KJ Hamler continue to develop and wait for Patrick to return from his hamstring injury.

Through three quarters Sunday, Drew Lock was thoroughly outplayed by Justin Herbert. Obviously, the fourth quarter could be big for Lock taking another step. What do you think he needs to do in the second half of this season to convince the Broncos they have their guy? Is management already convinced?
— Joe, Aurora

Lock through three quarters on Sunday — 12-of-23 passing for 92 yards and one interception.

Lock in the fourth quarter — 14-of-18 passing for 155 yards and three touchdowns. The touchdowns matched his career high for an entire game (last December at Houston).

Herbert was fun to watch because he has a rocket arm, moves around the pocket well and showed good awareness. The Chargers have a keeper.

The Broncos should feel they have a keeper at the end of the year if Lock a) stays healthy; b) shows progress in the red zone and on third down; and c) helps the Broncos to a record that merits Elway and Co. believing they should move forward with him.

Is management convinced already? Only they know, but I’m sure they feel better about Lock today than they did at halftime Sunday.

Do you think the Broncos will hold on to Shelby Harris after this season? He seems like a valuable veteran for the team, but so did Derek Wolfe.
— Jeff, Centennial

Harris is going to be an interesting offseason subplot. When last season ended, everybody — including myself and Harris — thought he would be moving to another team via multi-year contract.

But the market didn’t develop and Harris stayed with the Broncos on a one-year deal and he has helped himself through seven games with 23 tackles, 2 1/2 sacks and three pass break-ups.

Harris has the one trait Fangio covets in his defensive players: Versatility. He can play end and nose tackle. He can play first/second down and third down. And he’s durable.

The 2021 Broncos’ defensive line depth chart includes nose tackle Mike Purcell, end Dre’Mont Jones and current rookie McTelvin Agim. Everybody else is a free agent or in the case of Jurrell Casey, has a big cap number. That makes Harris valuable to the Broncos in the future.