How Tim Patrick went from Broncos unknown to Drew Lock’s No. 1 target 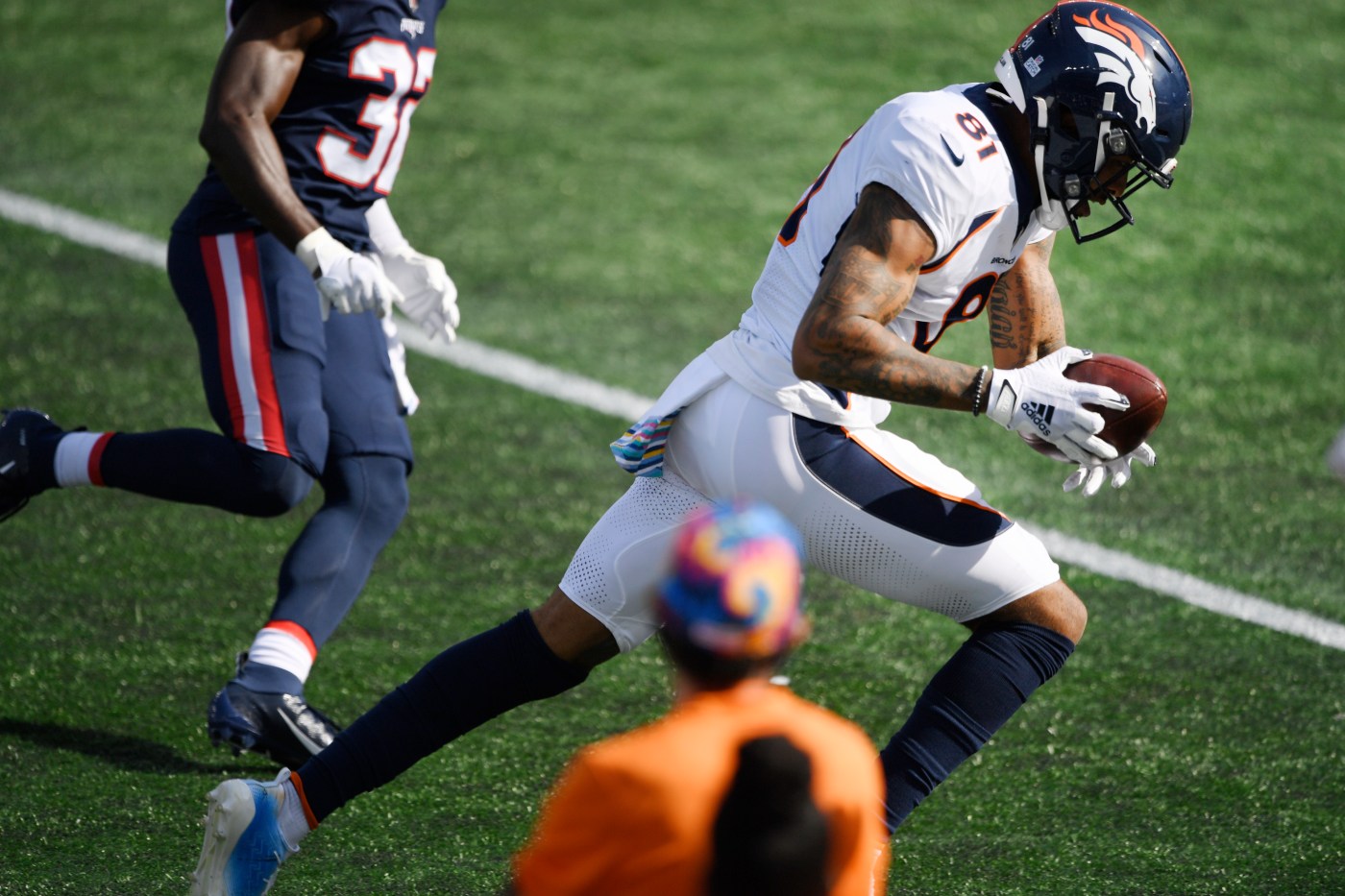 Somewhere, in a parallel universe two doors down from the Twilight Zone, the scribes are waxing poetic about the chemistry between Drew Lock and Tim Patrick. Heck, the talk radio wonks can’t stop salivating at how close, now that parallel-universe LeBron James has retired to run for office, the pair are to bringing a championship to Denver.

“Tim had it all as far as basketball, as well as for a receiver,” offered Chris Bonner, who grew up in San Diego not far from Patrick, the Broncos’ nimble wideout, and would later serve as his quarterback and chauffeur at Grossmont (Calif.) College.

“I remember actually seeing this video that someone at his high school (University City High) did of their pep rally, and they were having a dunk contest. I was like the only player on my high school team that could come close to dunking.

“And then I see a video of Tim and all his high school teammates and they’re all dunking. And I was like, ‘Geez, this guy’s legit.’”

You think? If it weren’t for The Legend of Phillip Lindsay, the 6-foot-4 Patrick would be the mother of all Broncos rags-to-riches, feel-good tales, the ultimate undrafted lottery ticket who gutted and clawed his way to the NFL elite.

The California native and former Utah Ute heads into Sunday’s tussle at Atlanta tied for the AFC lead in receptions of 25 yards or more (six). Of his 33 targets, 15 have led to first downs (45.5%), the best conversion rate of any Broncos wideout.

“Whoever the quarterback has been, he’s put the ball around him and he’s caught the ball,” Broncos offensive coordinator Pat Shurmur said of Patrick. “That’s what you need to do as a receiver.

“Aside from that, and all the things we appreciate (as coaches), we can put him at any three of the receiver spots and he can line up properly and do the right thing. When we ask him to block, he blocks. We appreciate all that he brings to the table.”

Also Check:  Whicker: Angels’ pitching mess caused by many whiffs in the draft

Meanwhile, back in this universe, Bonner’s got a few theories as to why Lock, the Broncos’ quarterback, has developed such synchronicity with Patrick, who missed that manic comeback win over the Chargers last Sunday because of a hamstring issue.

For one, they’re both grinders. For another, they’re both excellent basketball players, guys who could’ve made it as pros on the hardwood, too.

As a 6-4 shooting guard, Lock was considered one of the best prep hoops prospects of his class in greater Kansas City, drawing scholarship offers from Oklahoma, Wichita State and Missouri before ultimately playing football for the Tigers.

Patrick led his high school basketball squad to a CIF championship as a senior and, as a two-sport standout at Grossmont, helped the Griffins notch a share of the 2013-14 PCAC men’s basketball title.

“When you see him just coming out of his break, it’s a big target. You know you can put it probably a little further away from him, lead him away from the defensive backs, and he’ll go up and he’ll go grab it. It’s his size and his length, the fact that balls don’t have to be right there — that he’ll go get it with these long arms. He can jump. He’s got big hands. And he’ll go make a play.”

In other words: A killer catch radius. Every quarterback’s best friend. And every cornerback’s worst nightmare.

“I think (Lock’s trust) speaks volumes to what I’ve been doing since I got here,” said Patrick, who shot up the depth chart after Courtland Sutton tore his ACL during Week 2. “That’s all it takes. It takes one person to notice you and get your foot in the door. Thankfully, that guy was Drew, the starting quarterback of the team.”

Bonner can take credit for a small assist, too. After helping lead CSU-Pueblo to a Division II national title and cups of coffee with the Panthers, Chiefs and in the Arena Football League, Patrick’s old college teammate settled in Denver three years ago, where he now works as a mortgage lender.

Dude’s stayed in game shape, though. Not long after the Broncos signed Patrick to the practice squad for the first time in October 2017, the former Griffins reconnected. The Broncos wideout’s even been known to text his old QB during the offseason to see if he’s got some time to chuck the ball around, work schedules permitting.

“With him having suffered injuries (in college), you might think, ‘Man, maybe he’s slowed a step here,’” Bonner said. “But with Tim, it was like, ‘Oh, geez, he’s definitely in the best shape that I’ve ever seen him in.’”

The duo managed to hook up a couple times this past spring, during the first wave of the COVID-19 pandemic while the facilities at Dove Valley were shuttered and the Broncos were trying to simulate Organized Team Activities from their respective laptops.

“It definitely helped out, because I didn’t have a quarterback (to take throws from),” Patrick said. “Catching the ball is my job, so it was huge for him to be out here and take the time out of his day.”

Hey, once a pal, always a pal. There was a two-year stretch when Bonner would pick Patrick up every day and drive the pair of them to practice at Grossmont in El Cajon, Calif. Bonner was usually the one taking his wideout back home, too.

“It was entertaining,” Bonner laughed. “He usually took control of the stereo and put on all sorts of stuff. Soulja Boy. Not the dance Soulja Boy songs. It was some stuff I’d never heard.

“He was always turning me on to new music. The minute he got in the car, he was like, ‘Enough of whatever you’re listening to.’ He would always be playing some interesting stuff.”

Whether he’s rocking La Jolla or rolling at Mile High, Patrick’s never been shy. Especially when it comes to marching to the beat of his own drum.

“And the other thing I keep thinking of, that he reminded me of during the times we’d throw here, is that he’s had three different offensive coordinators the last three years (with the Broncos),” Bonner said. “And with guys that are on the fringe, you’re not going to automatically make the team. The fact that he’s had rotating coordinators and was still able to impress, it’s just a tremendous testament to the guy he is.”