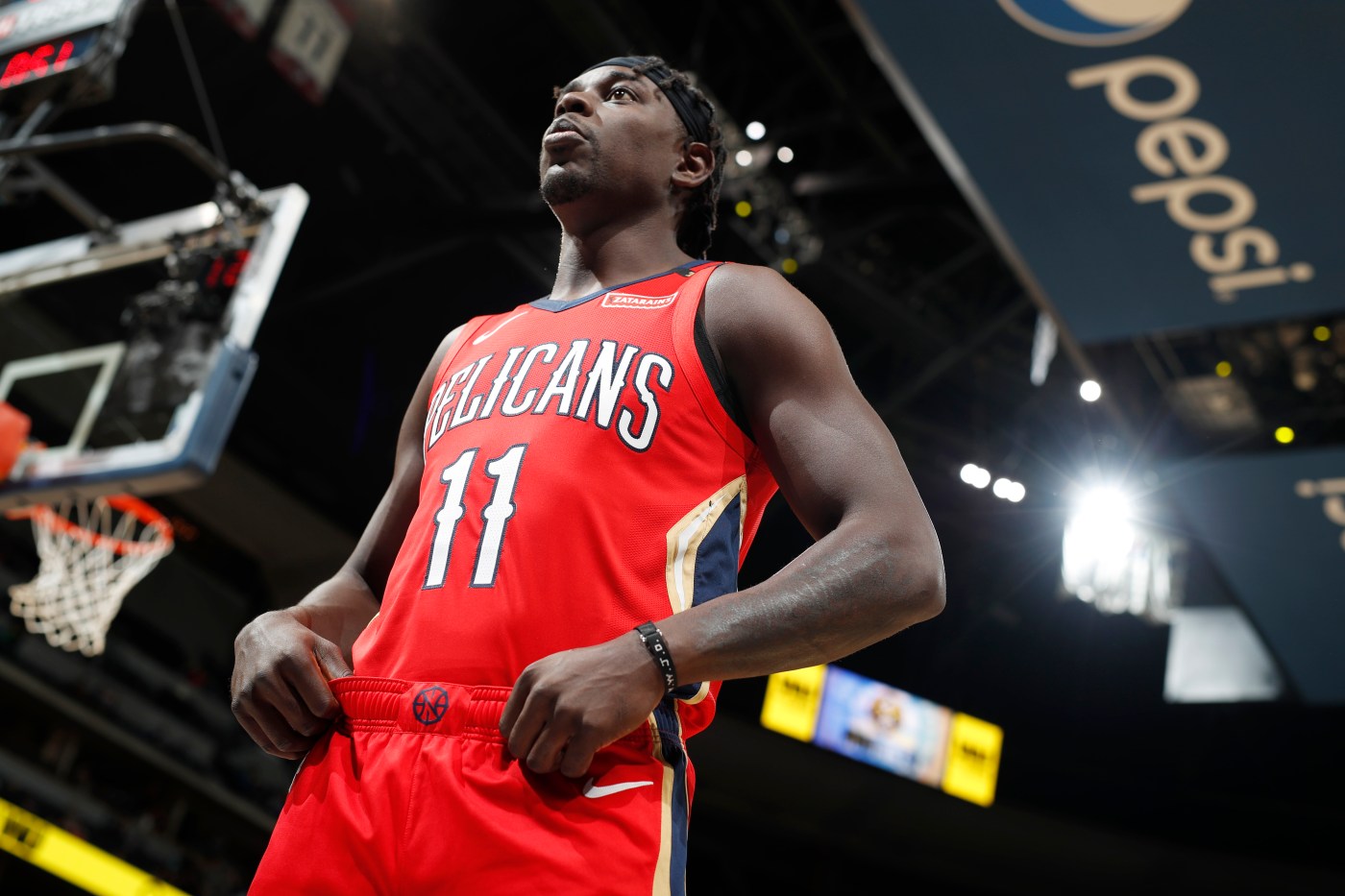 I’ve probably listened to a million different sports podcasts on Jrue Holiday destinations. Realistically, I think it comes down to the Nuggets, Warriors, Heat and Nets. I don’t think the Pelicans want Wiggins nor does he fit with them. And I don’t think the Pelicans take anyone outside of Herro from the Heat. For the Nets, what I’ve gathered is that they’d have to give up at least 2 of the 3 in Jarrett Allen, Caris LeVert and Spencer Dinwiddie and picks. My question is if the Nets want to keep Levert, would Dinwiddie, Allen and picks be more ideal than Gary Harris, Bol and two future picks? I feel like Gary Harris still has value to Van Gundy based off the podcasts he was on during the Western Conference Finals. Bol has high potential. I see him like Thon Maker and the Pelicans get more picks to combine with all the other picks they have from the Lakers and move up in the draft and get someone you really like. Is my mindset off on that?

I love it. I strongly believe the Holiday-Denver chatter is still real. To the question about Brooklyn, I’d be surprised if New Orleans was interested in Dinwiddie. It would have to take LeVert and, maybe, Allen, which is a lot for the Nets to part with. Also, plenty of NBA insiders are skeptical the Nets want to part with LeVert, who happens to be close with Kevin Durant.

If I was Pelicans executive David Griffin, I’d prefer an iteration of your Nuggets offer. It’s debatable whether Harris is a positive or negative asset at this point, but they’d need to include him for salary matching purposes. From there, Bol is an intriguing player. It’s not known how the Pelicans feel about him. Instead of one of your picks (which won’t be high since the Nuggets expect to make the playoffs for the third straight year), I’d add Monte Morris. The 25-year-old is a perfect fit in New Orleans. He’d replace Holiday, is a fantastic locker room guy and would have a chance to start.

Though the Nuggets love Morris, are they going to be willing to pay him handsomely as a backup? Or would Morris, set to be an unrestricted free agent next summer, be content elsewhere and get paid like a starter? We might get clarity as the trade window opens in the days before the draft.

Long-time season-ticket holder with seats on the floor. With COVID, do you think courtside seats and seats by the benches are no longer going to be an option for fans?

The NBA sent a memo to teams outlining potential protocols for fans in arenas. The memo, which was in draft form and was obtained by The Denver Post, said this: “Fans seated within 30 feet of the court would be required to undergo and return a negative coronavirus test that is either (1), a PCR or equivalent test sampled no more than two days prior to the game or (2), an NBA-approved rapid test sampled the day of the game.”

Obviously, the league is considering it.

The memo mentioned “the possibility of some teams beginning to host fans for games.” It’s unclear where the Nuggets stand.

Do you think Michael Malone will rest Jamal Murray and Nikola Jokic to start the season? And, if so, for how long you think they will sit?

The Nuggets’ season ended Sept. 26. Their training camp is set to start Dec. 1. That’s an offseason of 65 days (in addition to more than four months off from March to August). Between their 2019 exit against Portland and the start of training camp last season, the Nuggets had 141 days off. That’s a massive difference.

I don’t see Malone outright resting Jokic and Murray, but I do see him monitoring their minutes in training camp and especially once the season gets going. In March, Murray was averaging over 36 minutes per game. I’d expect that number to be a lot closer to 30 throughout December and January.

But your question raises an interesting point. The schedule isn’t out yet, and it’s rumored that we’ll have more back-to-backs to crunch 72 games into the season. Will the NBA be more lenient if players rest as a result of the truncated offseason? Teams should have far more leverage given that the Players’ Association agreed to an earlier start date (Dec. 22), as opposed to a January start date.

Big Nuggets fan all the way in Kentucky, love the team. Is there any way MPJ and Bol Bol can improve enough defensively in this shortened offseason to play long stretches in important games? They were both liabilities in the bubble, and I was hoping that especially MPJ would have some time to work on shifts and close-outs. What do you guys think?

On one hand, the absence of Will Barton was devastating for the Nuggets in the “bubble.” On the other, his injury allowed Porter to play over 23 minutes per game in the playoffs, thus feel what it’s like to get targeted. Throughout the playoffs, Porter took it personally that he was a liability on defense. More than once he mentioned how Malone challenged him to not just be an elite scorer, but be a complete player.

One of the reasons his rookie season was so inconsistent in terms of playing time was because he didn’t value the defensive end as much as Malone needed him to. That’s all going to change. Depending on Barton’s health or other potential offseason machinations, Porter may well be starting this upcoming season. That means Malone’s going to have to trust him. Porter made rapid improvements defensively throughout the playoffs. With more consistent playing time this regular season, the hope is he’ll improve at the same rate.

With Bol, my read is he’s still about two years away from really contributing. There were too many wonky factors from his “bubble” ball to know how much of it was real. There was, obviously, the environment itself, but there were also the seeding games where teams had various levels of motivation. I don’t see him being a rotation mainstay next season.

Do you see a scenario where the Nuggets trade up to like 15-20 in the draft? If so, who are guys they could be trading up for?

The Nuggets have explored getting into the top-10, two sources told The Denver Post. I don’t think moving up incrementally, as you suggest, should be ruled out, either.

If they were to move up into that range, there are a few names that are obvious fits. Kentucky’s Tyrese Maxey would fill a need at shooting guard. Unless you consider P.J. Dozier your immediate backup shooting guard, Denver’s a little weak in that department depending on your confidence level in Gary Harris.

Maryland’s Jalen Smith, a 6-foot-10 center, is another intriguing big man (do the Nuggets not have enough already?) Smith averaged 15.5 points and 10.5 rebounds last season while connecting on nearly 37% from 3-point range. His stock’s been jumping in recent weeks.

Finally, Precious Achiuwa might be the perfect target in that range. The 6-foot-9, 225-pound combo forward from Memphis is a beast defensively and could pair perfectly with Jokic on that end. Though he’s a work in progress on offense, how much would the Nuggets need to rely on him to score with Jamal Murray, Jokic and Porter doing their thing on offense?

I’m not sure the Nuggets target “shooting” as much as they target value. On draft night, teams need to be malleable. There’s strength in the big men around pick No. 22. A bit higher, there’s expected to be a run on wings and shooters, like Nesmith or Saddiq Bey. If the Nuggets move up, into the top-10 or potentially just a few spots, I think they’ll do so knowing the value in that tier.

With that being said, they traded perhaps their streakiest perimeter shooter in Malik Beasley last February. Gary Harris’ shooting woes are well documented. The Nuggets could use an infusion of outside 3-point shooting, especially from their backcourt. Vassell and Nesmith are excellent options if the Nuggets can get within range.

And if they draft a shooting guard, my guess is most of their money in free agency goes to replenishing their frontcourt. If they draft a big man, vice versa. They’d likely target another guard, but Harris will almost surely be out of their price range. Personally, I like the playmaking abilities of Jordan Clarkson (whose stint with Utah may have earned him more than the Nuggets can offer). Though the word is he’ll be back with Miami, Jae Crowder is an interesting fit for the Nuggets.

Is it just me or could Eric Bledsoe be a great fit for the Nuggets? The Bucks are desperate to get off Bledsoe’s contract. Could the Nuggets buy low and steal him away? If so, what do you think the Nuggets could get away with in terms of an offer?

The same Eric Bledsoe that hasn’t shot better than 41% in either of the last two postseasons and submarined Milwaukee’s offense on multiple occasions? Bledsoe has three more years left at around $18 million per year. The only mechanism that makes sense for the Nuggets would be to trade Gary Harris, whose contract is up in two seasons. While I don’t doubt the Bucks badly want to get off Bledsoe’s money, I highly doubt Denver is a landing spot.