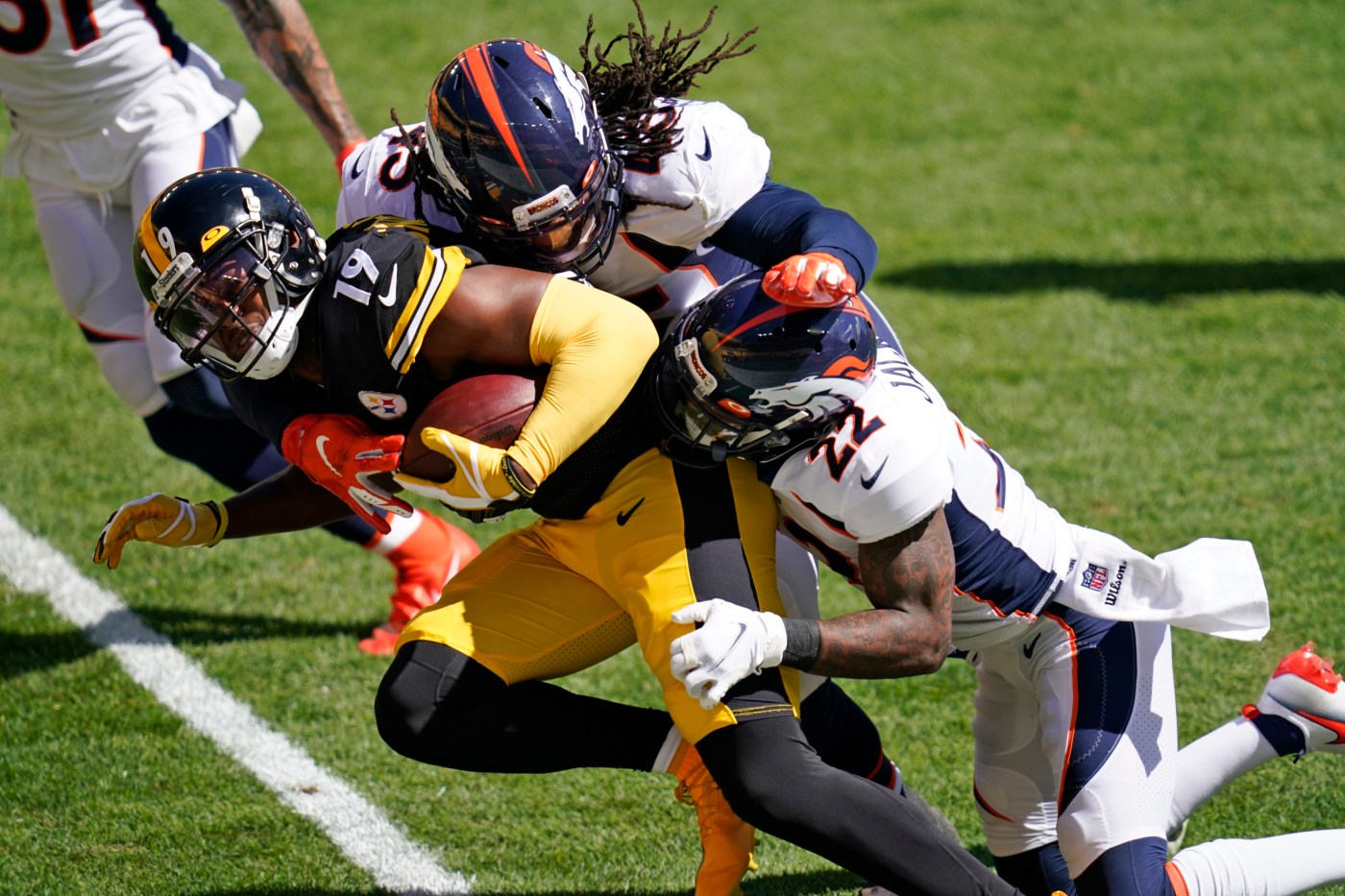 Twelve things about the Broncos entering Sunday’s game at Atlanta, one for every fumble this year:

1. The Broncos should run more no-huddle offense to solve their first-half woes, right? “That’s a common narrative,” offensive coordinator Pat Shurmur said. “We have plays that we use strategically (like) we have no-huddle plays or fast-from-the-huddle plays. There are times, where if you’re stalled out a little bit, maybe that’s a way to kind of jump-start things. … There are probably times when it would make sense, but there are also other times where you got to just do things better early in the game not to be put in that (come-from-behind) situation.”

2. I’ll meet Shurmur in the middle: Try the no-huddle after the offense gets the initial first down of a drive. That eliminates a three-and-out and sending the defense right back out there. And, of course, Shurmur has to choose his spots. No-huddle after the Broncos defense was on the field for 10 plays — not a good time. To start the second half — a good time.

3. A sign of inside linebacker Josey Jewell’s emergence on the defense happens after the team stretch in practice. During special teams drills, Jewell is standing on the side with Johnson, safeties Kareem Jackson and Justin Simmons and cornerbacks A.J. Bouye and Bryce Callahan. He’s graduated to defense-only work. “That puts you in a different state of mind,” Jewell said. “You have to be ready at the beginning of practice, but for the first 15 minutes, depending on what day it is, it’s different. Usually you’re practicing and getting reps, but you’re standing there watching and playing mental games.”

4. Another mindset adjustment for Jewell is meeting virtually. “Definitely,” he said. “Sometimes, you start day-dreaming a little bit because you’re not actually in the meeting (room). This offseason, you’re in a meeting and all of a sudden, you’re like, ‘What am I thinking about? It’s not football,’ and you have to get yourself back into it. It was definitely something to get used to and something we’ve done a good job of adjusting to.”

5. Broncos right tackle Demar Dotson and Falcons defensive end Dante Fowler won’t need an introduction. In August 2016, Dotson was with Tampa Bay and Fowler with Jacksonville for joint practices. Dotson was so dominant, Fowler wanted to slug it out and was ejected from practice. In August 2017, the two met again during joint practices without incident.

6. “He wasn’t as much of a hothead (as 2016),” Dotson told me that day after the kind of Florida late-morning practice that feels like it was held in a boiler room. “I threw him down the one time and he didn’t complain. He got up and went back to the huddle. He was a man out there trying to go about his business.”

7. The Broncos signed Dotson after Ja’Wuan James opted out of the season and he replaced Elijah Wilkinson (leg injury) in Week 4. According to my game charting, Dotson has been booked for two “bad” run plays, 1/2 quarterback knockdown and two quarterback pressures. Sunday’s game will be his 111th career start.

8. “I like Demar, but I like experienced guys,” Shurmur said. “He’s calm and steady. He’s been there, he’s done that and without them even mentioning it, I’m sure some of the younger guys can draw some confidence from that. I like the way he’s been playing — he plays hard, he’s a tough guy and he’s been helping us in the last month for sure.”

9.  Before Bouye was knocked out of the game by teammate Jackson, the Chargers went right after him in man coverage. Per my charting, quarterback Justin Herbert was 7-of-11 passing for 82 yards (24-yard touchdown) doing so.

10. Jackson delivered two thunderous hits in the second half — one apiece on Bouye (who didn’t return) and Chargers running back Troymaine Pope (who did). “He’s good at it,” coach Vic Fangio said of the big hits. “He’s grown up in this league where these rules have been instituted and constantly scaled back. He’s managed to understand what is and what isn’t allowed and he’s done a good job of tackling legally with good hits.”

12. A quick note on last week’s game. Chargers defensive coordinator Gus Bradley told reporters on Thursday that Phillip Lindsay’s 55-yard touchdown run was, “on me. I ran a pressure and put an inexperienced player in position to make the play and we hadn’t really shown that play in practice to that set.”