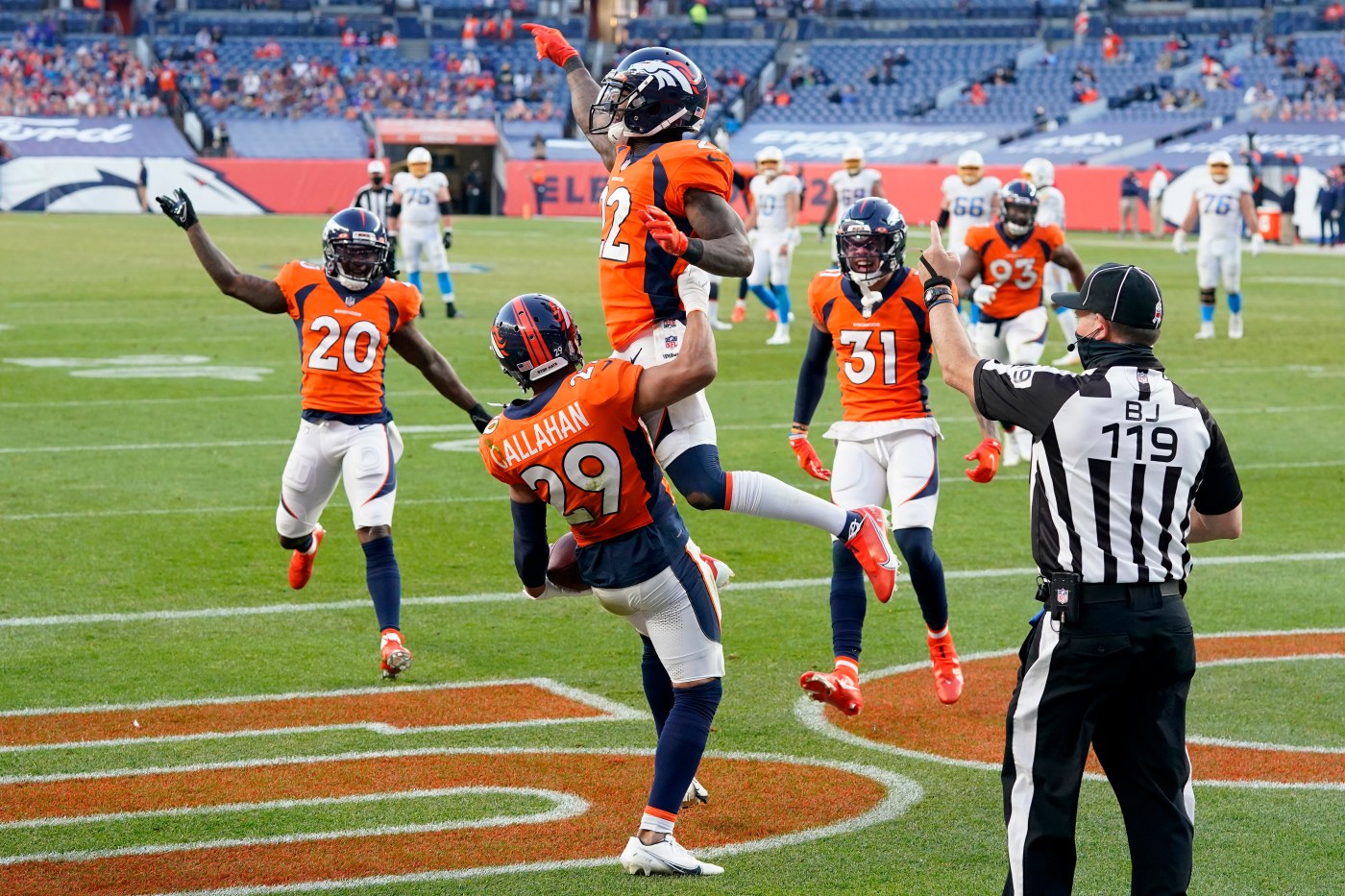 An obvious key to any come-from-behind win: Stop giving up big plays defensively.

As they built an 18-point lead Sunday over the Broncos, the Los Angeles Chargers had six plays of at least 22 yards. Something had to change … and it did.

The Chargers led 21-3 and had first down at the Broncos’ 34. Time to put the game away, right? Nope. Four defensive plays helped propel the Broncos to a 31-30 win.

1. First down from the Broncos’ 34. Defensive end Shelby Harris pressured Justin Herbert into a throwaway.

3. Third down: Coach Vic Fangio called a seven-man pressure (against seven-man protection) and Herbert threw incomplete. The Chargers kicked a field goal for a 24-3 lead, but Phillip Lindsay’s 55-yard touchdown run on the following series made it a ballgame.

4. And now the biggest play. Drew Lock had just been intercepted and the Chargers had third-and-5 from the Broncos’ 19 and a 24-10 lead. Time to put the game away, right? Nope. Herbert looked for Williams in the end zone, but cornerback Bryce Callahan made a terrific interception. That kept it a two-possession game.

Here is the rest of our review of the Chargers-Broncos game:

Sitting back. The Chargers should be kicking themselves in the shins for not sending more rushers at Lock. They rushed five or more on only three of his 47 drop-backs (6.4%). The previous low rate this year was Kansas City in Week 7 (20.9%) and the season rate entering Sunday was 42.2%. The Chargers still totaled two sacks, three knockdowns and seven pressures for 12 total disruptions. Right guard Austin Schlottmann was booked for six disruptions (one sack, two knockdowns, three pressures).

Deep shots pay off. Lock misfired on his first four downfield throws (at least 16 “air” yards). But three of his final five attempts were positive plays. He connected with receiver Jerry Jeudy for 43 yards (21 yards post-catch) and receiver DaeSean Hamilton for a 40-yard touchdown (17 yards post-catch). And his final throw was 18 yards into the end zone that allowed tight end Albert Okwuegbunam to draw a pass interference penalty to set up the winning score.

Penalty problems. The offense had a season-high six penalties (includes off-setting fouls, but not declined flags). Left tackle Garett Bolles was called for illegal block in the back (needless penalty), false start and an off-setting holding. Also flagged were Jeudy, Hamilton and the offense (illegal shift). On the plus side, Lindsay (late hit) and Okwuegbunam (two pass interference calls) drew penalties.

A screen pass (almost). The Broncos cracked open the playbook in the first half for, wait for it, a screen pass! Left guard Dalton Risner and center Lloyd Cushenberry got on their collective horse to get downfield, but Chargers defensive end Uchenna Nwosu locked up running back Melvin Gordon and Lock had to scramble for one yard. Two plays later, the Broncos used a tight end screen to Noah Fant that gained three yards (he caught it six yards behind the line).

Lindsay’s long run. A play before Hamilton’s touchdown cut the Chargers’ lead to 27-24 with 7:30 remaining, Lindsay rushed for 20 yards (plus 15 for a late hit by safety Nasir Adderley). Risner pulled right to block. Right tackle Demar Dotson walled off linebacker Kenneth Murray and Fant made a downfield block.

Heavy four-man rush. Despite Herbert being a rookie, the Broncos didn’t try and overwhelm him — they sent five or more on 12 of his 47 drop-backs (25.5%). Herbert was 6-of-12 passing for 82 yards, one touchdown and one interception against extra rushers. Besides the seven-man rush, Fangio dialed up three other good third-down pressures in the second half, knowing time was running out. He rushed six (Jackson/Johnson) on third-and-10 (three-yard pass), rushed five (cornerback Duke Dawson) on third-and-5 (Callahan interception) and six on third-and-7 (incompletion). In all, the Broncos had 10 disruptions (two sacks, two knockdowns and six pressures). Outside linebackers Bradley Chubb and Malik Reed had three disruptions apiece.

Tackling briefly disappeared. The Broncos had six missed tackles and four came on the Chargers’ final possession. Ojemudia had three during the drive and cornerback Essang Bassey the other. Also missing tackles were cornerback A.J. Bouye and outside linebacker Anthony Chickillo.

Highlight plays (besides the aforementioned four plays). Simmons was playing center field on the Chargers’ opening drive when he intercepted Herbert 34 yards downfield and his 46-yard return set up a Broncos field goal. … On fourth-and-1 from the Broncos’ 25, defensive end Dre’Mont Jones wedged inside of right tackle Bryan Bulaga to stuff Kelley for no gain. … Johnson’s four-yard tackle for loss forced a Chargers field goal (27-17).

Defending run. The Chargers rushed 38 times for 210 yards, both seasons highs allowed by the Broncos. The Chargers had four rushes of at least 18 yards, but the Broncos totaled eight run “stuffs” (gain of one or fewer yards). Johnson had three “stuffs” plus one in the passing game.

Touchbacks help coverage. The Broncos didn’t mess around with their kickoffs — Brandon McManus had four touchbacks in five attempts and the lone return was 26 yards. The Chargers did have a 30-yard punt return when KJ Hill got outside and the Broncos couldn’t keep containment.

D. Harris’ big tackle. Gunner Davontae Harris made a fine play in the first half when he beat his man downfield and stopped Hill for a one-yard loss. In the second quarter, Harris was duped by Hill’s fair catch signal, losing track of the football and resulting in a touchback (61-yard punt).