*** The Pac-12 Hotline newsletter is published each Monday-Wednesday-Friday during the college sports season and twice-a-week in the summer. (Sign up here for a free subscription.) This edition, from June 5, has been made available in archived form.

There will be more positives this month as teams open doors for voluntary workouts — perhaps hundreds of positive tests across the 130 teams in major college football.

But the early-June news provides a look into the August and September reality:

For all the protocols in place, for all the precautions taken, there will positive tests during training camp and the regular season, forcing teams to isolate players for up to 14 days.

Success in 2020 — assuming there is a season — starts with keeping as many players and coaches as safe as possible.

On the field, victory could depend more on coronavirus mitigation techniques than red zone and third-down execution.

In other words: Coaches should consider isolating certain players during the week to prevent them from requiring isolation on Saturday.

— Limiting the starting quarterback’s interaction with teammates, both in meeting and on the practice field.

— Keeping the starting and backup quarterback separated from each other, thereby decreasing the risk of both testing positive and requiring quarantine.

— Doing the same for the No. 1 offensive line, perhaps the starting secondary and even the placekicker — all units/positions where depth chart disruption correlates strongly to defeat.

Any decrease in interaction on the practice field naturally decreases cohesiveness on game day. But in many cases, the prospects for victory are better with the starters at 80 percent efficiency than the second stringers at 100 percent.

For that reason, we expect coaches to get creative with roster management this fall.

Oh, and there’s one more player to consider for Monday-to-Friday isolation … a player nobody notices until he’s gone.

Whatever coaches do during the week, protect the long snapper. — Jon Wilner.

• The Pac-12 has relied on a collection of 12 public health and infectious disease specialists to guide its decisions on bringing players back to campus for voluntary workouts. We pulled back the curtain on the conference’s coronavirus advisory committee.

• A new Hotline podcast was published Friday morning, for your weekend listening enjoyment. I chatted with CBS Sports columnist Dennis Dodd about all things football: The momentum shift, the likelihood of a 2020 season, the challenges for the fall, the potential legitimacy issues facing the CFP and more.

• ICYMI: We asked a leading epidemiologist at UC San Francisco to outline a weekly coronavirus testing plan that would prevent spread during training camp and the season. After all, testing is the key to the fall.

• The Tuesday newsletter examined how white head coaches in charge of rosters filled with African American players should respond (publicly and privately) to the George Floyd killing, police brutality and societal inequities. Many thanks to Pac-12 Networks analyst Nigel Burton for the eloquent education.

• Previous editions of the newsletter are available in archived form.

(Note: The NCAA announced Thursday that players have until either Aug. 3 or 10 days after the conclusion of the NBA Draft Combine — whichever comes first — to return to school. The NBA has not set dates for the combine.) 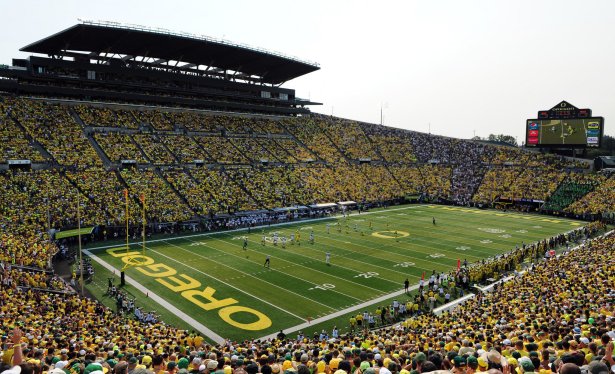 (Note: The Hotline newsletter includes links to sites that could require a subscription once the number of free views has been reached.)

• Oregon will bring players back to campus June 15 with a phased approach, according to athletic director Rob Mullens. “It’s not going to be a lift up the garage door and everybody comes back,” Mullens said. “It’s going to be very calculated.”

• That move is rooted in new directives from Oregon Gov. Kate Brown, who specifically addressed college sports in her latest comments on social restrictions. (So very SEC of her.)

• Washington hopes to track with the June 15 return date, per AD Jen Cohen, but the timing depends on King County.

• Chip Kelly’s statement on injustice wasn’t well received by a few former Bruins, who criticized Kelly’s treatment of black players. (The statement mentioned Martin Luther King Jr. but not George Floyd.) However, other former players stepped in to defend Kelly.

• Meanwhile, the current UCLA players created an inspiring video about Floyd and the need to police brutality.

• Arizona State punter Michael Turk, one of the best in the nation, will return for 2020 after the NCAA granted a special-eligibility waiver. Turk had declared for the NFL Draft (and hired an agent) but was not selected.

• Oregon State acted swiftly to remove freshman Rocco Carley from the program after an audio surfaced with racists remarks.

• Washington tailback Sean McGrew is supporting the fight against racial injustice with his mouth and his money.

• With revenue expected to drop, Oregon State announced a series of cost-cutting moves that include the elimination of 23 positions in the athletic department and a potential 20-percent budget reduction. (Other schools undoubtedly will follow suit if the football season is disrupted.) … Oregonian columnist John Canzano put the spotlight on AD Scott Barnes: “Barnes must lead. Not with strategic plans or feasibility studies. But with shrewd ideas, passion, and by outworking and out-thinking his conference peers. Oregon State is knee-deep in plans to renovate the old side of Reser Stadium. And football coach Jonathan Smith fell one victory shy of bowl eligibility last season. Those are focal points.”

• Washington will pay far less — almost $1 million less — to its football coaching staff this season than it did last year. And that doesn’t include the compensation drop at the top, from Jimmy Lake to Chris Petersen. Per the Seattle Times: “UW’s assistant coaching salary pool dropped from $5.94 million to $5.15 million in 2020, according to coaching contracts provided by UW to The Times on Tuesday. Many of the program’s returning assistants did receive raises, and all 10 are under contract through at least the end of the 2021 season.”

• The NCAA on Friday announced a one-year postseason ban and three years probation for Oklahoma State, whose former assistant coach, Lamont Evans, accepted bribes as part of the corruption scandal. That’s a bad, bad sign for Arizona, whose transgressions are at least as serious.

• Washington State guard Jaylen Shead recounted a disturbing situation during his tenure at Texas State — one that explains why he transferred to WSU a month before the 2019-20 season began.

• Utah lost Both Gach, but top scorer Timmy Allen is a better bet to stick around for next season, writes the Salt Lake Tribune’s Josh Newman.

• The greatest coach in Cal history, in any sport, spent only six years in Berkeley — but is nonetheless the obvious choice.

What’s coming on the Pac-12 Hotline:

• The Hotline is tracking infection rates and hospitalization trends from the Pac-12 states that have reopened their economies (Utah, Arizona) in search of lessons for those that haven’t.

• What impact might the elimination of standardized tests from the University of California’s admissions process have on recruiting? We’ll dive into the post-SAT world.

• The third installment of ‘Your Voices,’  a series in which fans recall their favorite Pac-12 memories, is scheduled for next week.

• There’s plenty more planned — the Hotline has enough content in development at this moment to last us well into July — but the publication schedule is a bit fluid.

The next newsletter is scheduled for Tuesday. Enjoy it? Please forward this email to friends (sign up here). If you don’t, or have other feedback, let me know: [email protected]