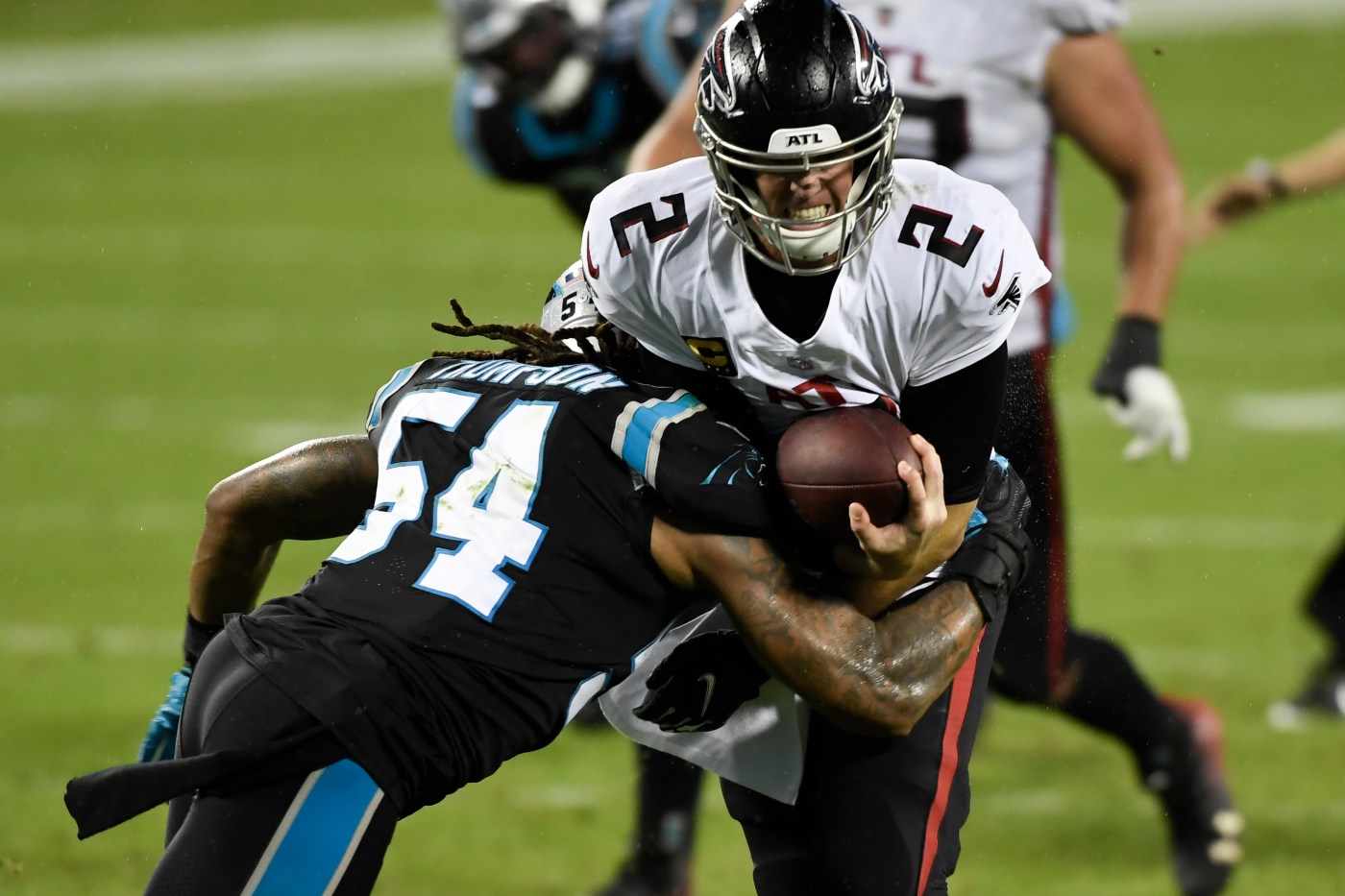 Matt Ryan threw for 281 yards and ran for a touchdown, Younghoe Koo made four field goals and the Atlanta Falcons held on to beat the Carolina Panthers 25-17 on Thursday night behind a strong defensive performance to avoid a series season sweep.

The Falcons (2-6) have had a penchant for squandering leads, coming into the game 1-3 when leading entering the fourth quarter. Carolina was driving late, but Atlanta stopped the rally when Blidi Wreh-Wilson intercepted Teddy Bridgewater near the Falcons’ 10-yard line with 1:04 remaining.

“That’s what we’ve been talking about, ending games with either sacks or interceptions and the guys went out today and did exactly that,” Falcons coach Raheem Morris. “The ball went up in the air and Blidi came down with it and it was awesome.”

Todd Gurley grinded out 46 yards rushing and a touchdown, Julio Jones added 137 yards receiving against a banged-up Panthers secondary and the Falcons defense limited the Panthers to 2 of 10 on third down conversions to improve to 2-1 since Morris replaced Dan Quinn as head coach.

Panthers coach Matt Rhule said it felt like Bridgewater was constantly under duress.

“We had a hard time blocking their front,” Rhule said. “We weren’t able to get our receivers involved. We were 2 of 10 on third downs and we can’t live like that.”

Bridgewater tried to spur Carolina to a comeback in front of a sparse crowd of 5,240 due to COVID-19 after Koo missed an extra point that would have made it a two-possession game.

Bridgewater, who was knocked out of the game for two possessions with a neck injury following a late hit by Charles Harris — one that resulted in him being ejected — took over with the Panthers down by eight points with less than 3 minutes to play. He completed a 35-yard strike to D.J. Moore on third and 18 to move the Panthers into Falcons territory. But his final pass was easily picked.

Bridgewater was limited to 176 yards passing as the Panthers (3-5) lost their third straight game without injured Christian McCaffrey.

“I don’t think any of us played real well tonight,” Rhule said of Bridgewater’s performance.

Said Bridgewater: “Tough loss and we have to find ways to finish the game. That can’t be the common thing around here — coming up short.”

The Falcons avenged a 23-16 loss to Carolina 18 days ago in which Bridgewater threw for 313 yards and two scores and Mike Davis piled up 149 yards rushing. Davis was held to 77 yards this time on a wet field where players routinely swapped cleats to adapt to the changing conditions.

But Jones didn’t play in the first meeting.

He was a huge difference in this one, setting the tone by hauling in catches two catches for 52 yards on the game’s first two plays. Playing against a Panthers secondary that was already without two starters and lost another when Donte Jackson reinjured his toe in the first half, proved to be easy pickings for Jones.

“It’s fun, no question about it,” Ryan said of having Jones in the lineup. “The way we started the game is when we’re at our best, play-action pass. I hope it’s the start of something. I really feel like, although we’re 2-6, we’ve been in some tight ones.”

The Panthers had opened a 14-6 lead in the second quarter when Bridgewater found Curtis Samuel for a 29-yard touchdown pass on a well set up flea flicker. It was Samuel’s second TD of the half, scoring earlier on a 12-yard run up the middle to give Carolina its first lead.

The 24-year-old Samuel has three career games with a TD rushing and receiving, which trails only Jerry Rice (5) among wide receivers in the Super Bowl era.

Ryan said he wasn’t sure if he would get to the end zone on a 13-yard TD run in the first half but knew he had a chance when cornerback Troy Pride slipped while trying to chase him down.

“Just fast enough,” Ryan said. “I feel like I’ve always been that way throughout my career, just fast enough to make them pay sometimes on third downs. It was a big score for us there. We really needed it.”

When asked about the reactions of his teammates, Ryan said, “I can’t tell if they’re laughing at me or just having a good time and excited for it.”

Falcons: Wide receiver Calvin Ridley left the game in the second quarter with an ankle injury after making a reception in the red zone and did not return. Morris offered no update on his status after the game. … Cornerback Kendall Sheffield left the game early with a head injury, but did return.

Panthers: Cornerback Donte Jackson’s lingering toe injury forced him to leave the game early again, and the banged-up Panthers secondary had to finish with rookie Troy Pride and Corn Elder at cornerback spots.

Falcons: Host the Broncos on Nov. 8

Panthers: Open the second half of the season at the defending Super Bowl champion Chiefs on Nov. 8.