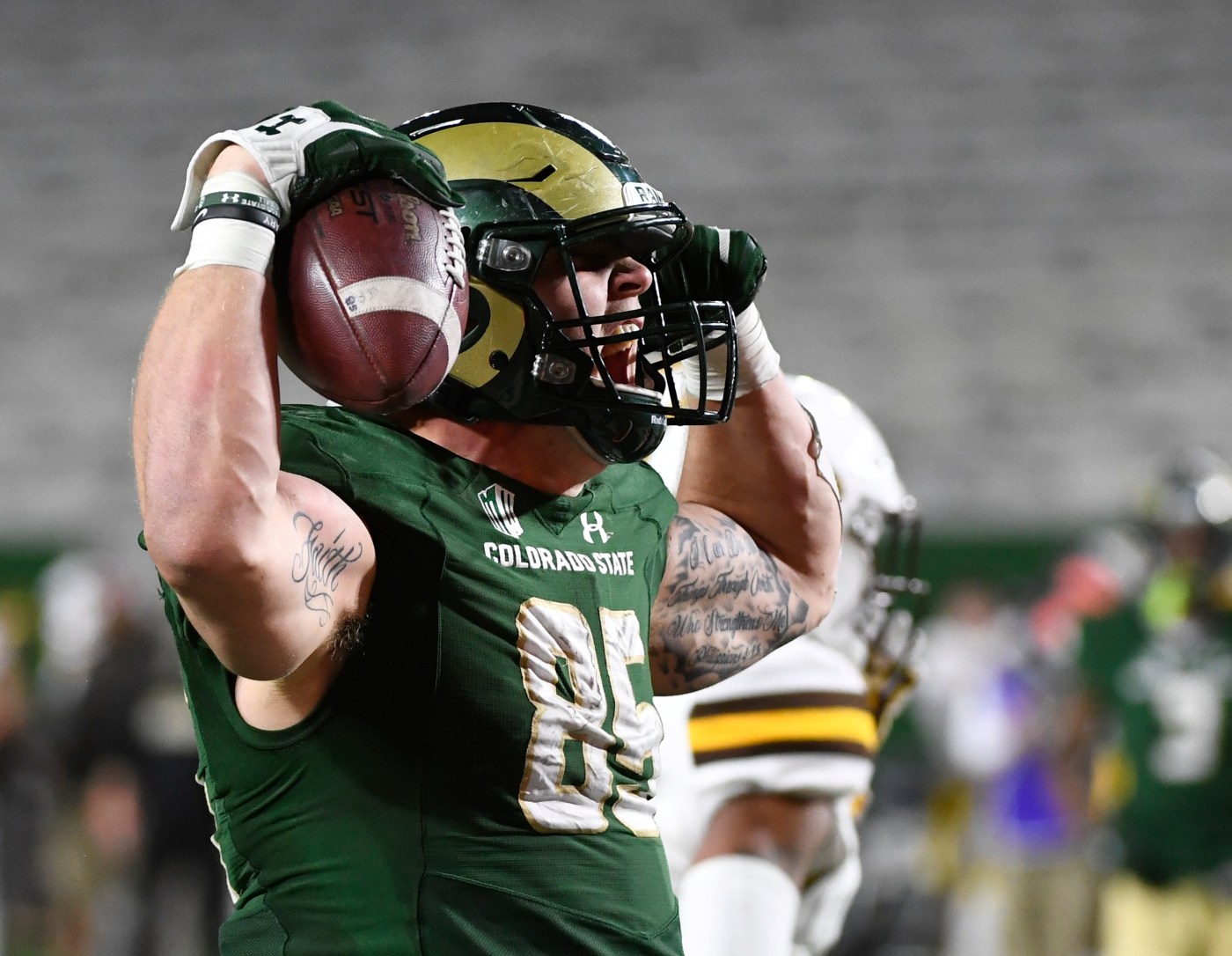 FORT COLLINS — A year ago, they blow this. Don’t they? Concentration would lapse, brain cramps would pile up, and the cameras would catch the CSU Rams celebrating before the job was actually done.

Some linebacker misses a tackle. Some defensive back blows a coverage. Some kicker scuffs a chippie. And some other team runs over and grabs the flipping trophy as time expires.

“It’s the best energy I’ve felt since I’ve been here,” CSU quarterback Patrick O’Brien said after his Rams held on for a 34-24 win over rival Wyoming late Thursday night, the program’s first victory in the Border War since 2015. “It’s really special for me. But it’s (more) special for the guys that have been here longer than I have.”

The 112th iteration of the Border War saw two old, familiar sidelines experience a total body and identity switch, like something out of the movie “Freaky Friday.” In the game that mattered most to the CSU fans watching everywhere but Canvas Stadium, the Rams managed to out-Bohl Wyoming coach Craig Bohl.

CSU wasn’t perfect, by any stretch. But man, did it play clean. The Rams of Steve Addazio, Week 2, looked nothing like the Keystone Kops of Week 1.

They were physical. Smart. Poised. Disciplined. They found a way to be air-tight when it mattered most. Especially late, after cushions of 17-0 and 24-7 began to slowly, methodically, wither away.

Also Check:  Kiszla: Shame on NFL for rubbing COVID hypocrisy in face of Broncos, making them play without QB in ridiculous loss

The Cowboys (1-2), meanwhile, were a hot mess pretty much from the jump: three turnovers, eight penalties, and an offense that converted on just four of 15 third-down tries on the night. Wyoming burned through its first two timeouts of the tilt in a hurry, looking almost rattled by the sight of that many empty seats on Pitkin Street staring back at them.

“I wish I had the answer to that,” Bohl told reporters when asked why the Pokes needed jumper cables to turn the engine over.

The Rams, conversely, came out of the gate with smoke blowing out of every nostril. Cornerback Marshaun Cameron set the tone for the first half with a pick-6 that snuffed the Pokes’ first possession. The next time Wyoming had the ball, with 10:03 left in the first quarter, Cameron strip-sacked quarterback Levi Williams on third-and-12 at the Wyoming 36, setting up the Rams’ second touchdown of the contest.

“We’re going to keep doing this every week,” Cameron vowed.

“If it’s up to me,” CSU linebacker Dequan Jackson said. “(Thursday is) exactly what we can expect.”

Corners don’t turn in Week 2, Year 1 of a new coaching regime. Not completely. But Thursday was a marker, a snapshot, a teaser, of what Daz Ball –done right — could look like at its apex.

Addazio, a lifetime East Coaster, is still learning the Front Range. But he knows that trophy games are trophy games, in any region. He also knew enough to let Rams senior defensive tackle Toby McBride take the baton on the Border War, even giving the Fort Morgan native the floor during practice on Wednesday.

All of which made it doubly satisfying to watch McBride, whose Rams tenure has been marred by injuries and heartbreak in big games, record two TFLs and force a fumble against the Cowboys. And blissfully cathartic to see that 285-pound plugger with the bad back lead a dead sprint to retrieve the Bronze Boot.

“Oh, man, I knew my brother was hauling it,” laughed CSU tight end Trey McBride, who scored twice on the Pokes, dragging a hapless Wyoming defender into the end zone during the second. “I had no idea he was that fast.”

We had no idea they were this tough.

“It felt good winning, to get rolling,” Jackson said. “I think that those guys know what it takes to win and we just won a big-time rivalry game … that first (loss) was unfortunate. But going forward, I think the guys, we’re going to put on a show.”

We may not know who they are yet, these Rams. But if Thursday taught us anything, it’s that we know for dang sure who they aren’t.