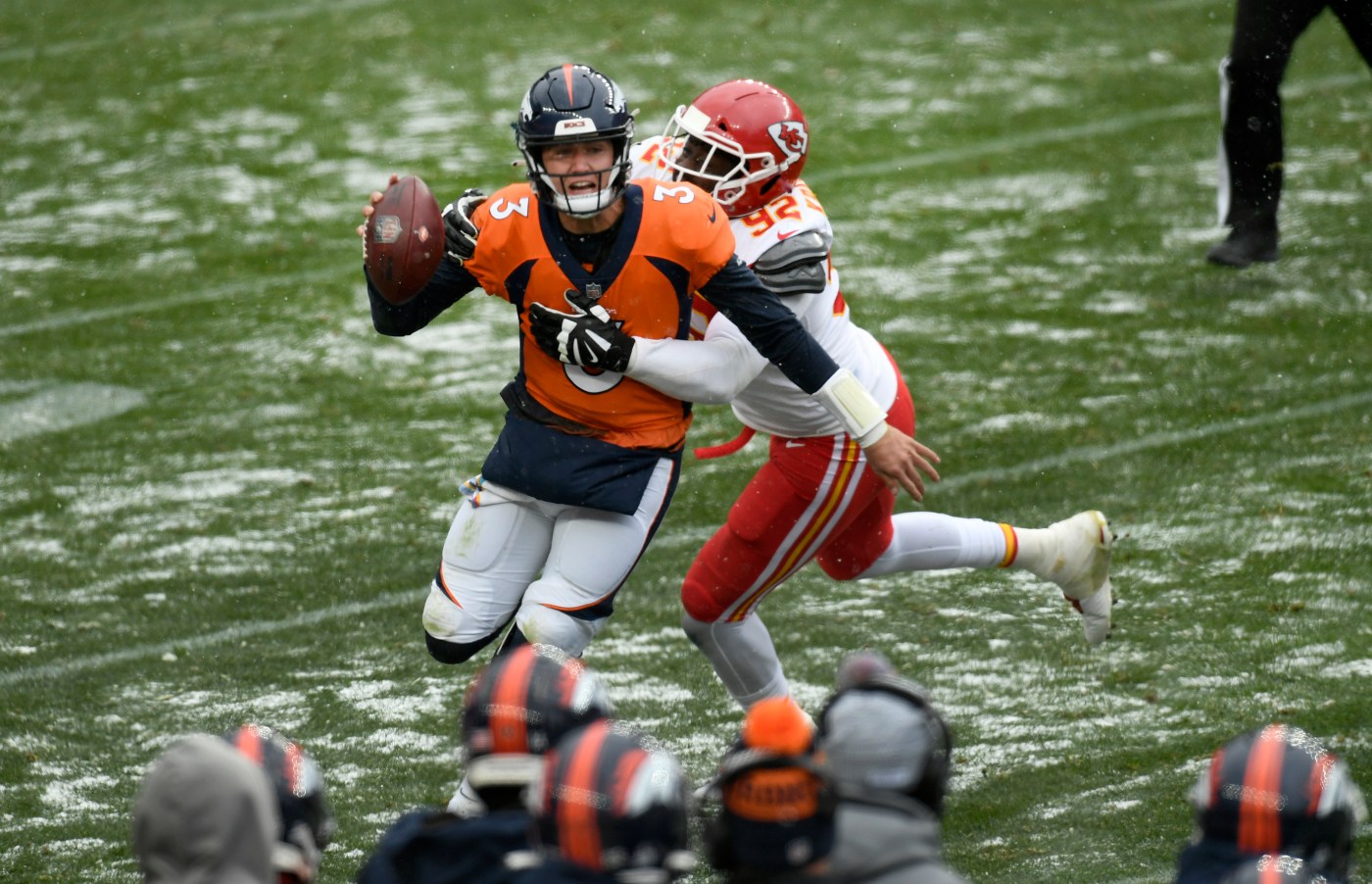 Answer: Yes. Kansas City led 10-6, but the Broncos had started their drive at the 1-yard line and moved to the 49.

On first down, quarterback Drew Lock was sacked to set up second-and-13 from the 46. The Broncos emptied the backfield and had Lock in the shotgun.

At the snap, the Chiefs rushed six defenders against five blockers and linebacker Anthony Hitchens was the unaccounted blitzer. He had a free run at Lock, who threw side-armed and off his back foot in 1.59 seconds.

The pass to tight end Noah Fant had little velocity and was semi off-target. Sorenson read the play perfectly and cut in front of Fant for the score.

Q: Moments later, the Broncos gave up their first kickoff return touchdown since 2017. What happened?

A: Either the Broncos had terrible pursuit or the Chiefs perfectly-blocked Byron Pringle’s 102-yard return.

Brandon McManus’ hang time was 4.02 seconds so it wasn’t a line drive. To Pringle’s right, Royce Freeman and Essang Bassey weren’t in position to make the tackle and Derrek Tuszka was double-teamed. To Pringle’s left, Duke Dawson and Tyrie Cleveland over-pursued and Pringle cut to the middle of the field to make them miss. The only player to get a hand on Pringle was Nigel Bradham.

Pringle’s touchdown made it 24-9 Chiefs.

Q: The comedy of errors continued in the second half on the botched flea-flicker. Ever seen the kind of toss Melvin Gordon tried to attempt?

A: Nope. The Broncos’ initial second-half drive was in business after a 12-yard catch by receiver Tim Patrick and 10-yard end-around run by receiver KJ Hamler.

Gordon received the hand-off from Lock with no issues. As he turned around, Gordon appeared to get tangled up with center Lloyd Cushenberry and right guard Graham Glasgow.

Whether that contact impacted Gordon’s flip back, we don’t know — he declined to meet with the media after the game. The flip was high and Lock could only get a hand on it before it bounded backward. The Chiefs’ Frank Clark got a perfect bounce and returned it the Broncos’ 14-yard line.

Q: The Broncos aren’t used to losing at home by 27 points. How rare was this kind of blowout?

A: Pretty rare. The 27-point margin of defeat was the 12th-biggest in franchise history and the largest since Detroit beat the Broncos 45-10 in November 2011.

Q: The Broncos’ defense didn’t allow a third-down conversion and only one offensive touchdown in the first three quarters. What more do they need to do?

A: First up is takeaways. The Broncos had a minus-3 differential on Sunday and they’re at minus-5 for the year (tied for third-worst).

But the Broncos need to look at the big plays Kansas City made to get into scoring possession.

Second quarter (field goal): The Chiefs had plays of 16 and 38 yards.

Third quarter (field goal): The Chiefs had plays of 16 and 17 yards to start the drive.