A mum claims her hairdresser was ”necking gin’ while dying her hair and fitting a weave – leaving her with the ‘worst hairstyle of 2020’ and a needle stuck in her scalp.

Emily Hunt, 24, said she ‘wanted to die’ when she realised just how terrible her hair looked after getting the sew-in weave before the second lockdown.

Hairdresser Emily asked the woman if she would touch up her roots, add some highlights and attach a £225 human hair piece before English hair salons shut for a second time on November 5.

She agreed and asked for £70 to cover her time and expertise, quoting £25 to apply hair dye Emily provided and a further £45 to braid and sew in the hair piece Emily bought.

Emily said the woman spent four-and-a-half hours at her home carrying out the work – drinking gin and washing her own hair. 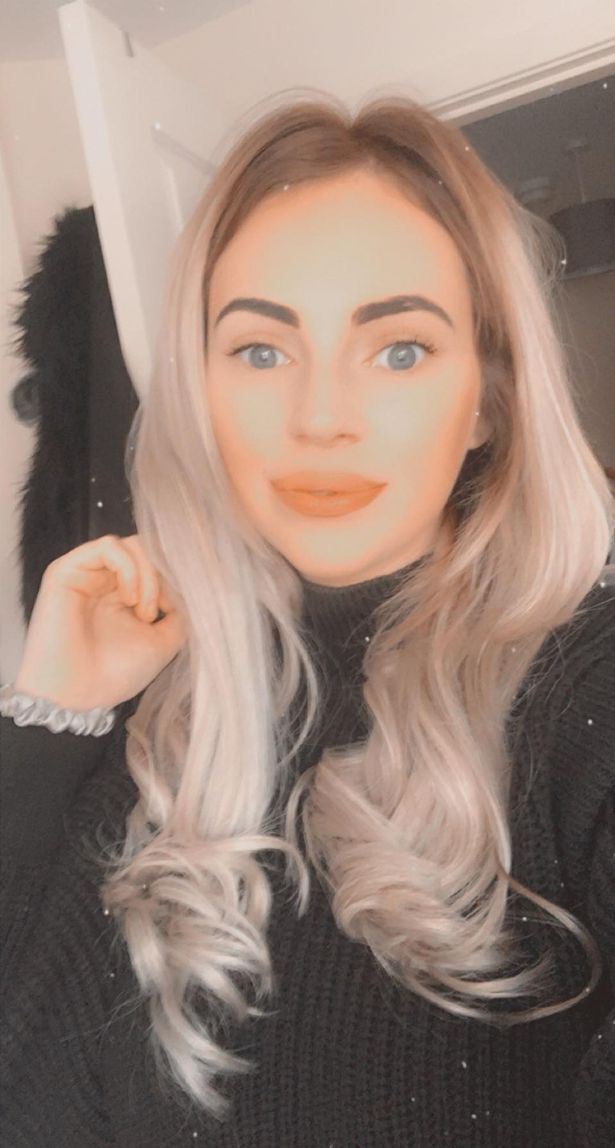 The mum-of-one claimed she was forced to do ‘half the work’ herself – mixing the colours for her own hair, rinsing it out and even sewing some of the hair pieces together.

Emily said the woman demanded the money before she left but later offered to fix it after admitting she was ‘sure she’d done a terrible job’ from what she could ‘remember’.

When getting her weave re-fitted at a salon, Emily said stylists’ eyes were ‘popping out of their heads’ and they said it was the worst fitting they’d ever seen.

While trying to salvage the do, the second hairdresser then discovered the needle that had stabbed Emily’s scalp – and even pricked her own finger on it.

After sharing pictures of the horror hair-do on social media, the post went viral racking up nearly 12,000 likes, shares and comments, with one person quipping ‘if 2020 was a weave’.

Emily said: “It was the worst hairstyle of 2020. My hair just summed up the year.

“As she was leaving I knew it was terrible, I just wanted to go upstairs and die.

“I think it [the bad style] was a combination of her being a bit drunk and not being very good at weaves.

“She’d said ‘I thought I was going to come round for a drink’ and I said ‘yeah we can have a drink if you want and we can do my hair another time’ and she went ‘no we can have a drink and I’ll do your hair. Trust me it’ll be fine I’ll be able to do it’.

“The next day when I looked in the mirror I thought ‘I can’t even go out like that’.

“I tied it in a bobble very low down on my head and tucked it underneath my coat and walked to the hairdressers.

“When I got out of the hairdressers I cried with relief that my hair was sorted.”

Emily said the pair had started chatting over social media and arranged to meet up, it was then Emily asked if she was willing to do her hair.

Emily, who lives alone with two-year-old son Alfie Hunt, invited her over to do a root fade, add some highlights and attach the hair piece.

As a friendly gesture, Emily offered the hairdresser a drink while doing her hair.

Emily said: “We were on lockdown from Thursday, so that’s why I needed to get my hair done by someone quick.

“As I’m a hairdresser I’ve got a trade card so I provided the medium blonde colour and hair piece.

“She made me fix the colour, all she did was paint me some roots on and then told me to wash it off while she was having a cig at the door.

“She put eight highlights throughout the top and I even took the eight foils out of my hair myself too.

“I thought it was a bit weird, I remember thinking ‘why am I even paying someone when I’m doing half of the job myself?’.”

After Emily rinsed the dye off her hair, the woman told her to partially-dry her own hair before she attached the hair piece.

Emily, who does microbond hair extensions on her own customers, said: “She told me she had to do my plaits while my hair was wet, which I found weird.

“She said to only dry it 20%, I stood in the kitchen and I blasted it myself while she went for another cig.”

The woman then plaited three rows of hair to attach the sew-in weave to.

Emily said: “When she’d done the first row of weave she went for a shower and washed her hair with my shampoo and conditioner then she came back to it.

“She did three plaits, but the bottom one was very, very low and then she didn’t leave a big enough gap to go up to the other one.

“They were just all very loose and I could feel the top of the hair extensions touching my ears and the back of my neck.

“When that happens, that’s when you need to get it re-done, not when you’ve just had it done.

“When she’s been sewing the hair onto the plait she’s not secured it, she’s not even finished off the sewing and she’s left the thread hanging down with a needle.

“When she left she said ‘transfer me that money now’, I was put in a position where I couldn’t really not send it.”

After coughing up £70 when the woman left at 10.30pm, Emily went to bed mortified at her mop and had a fractious night’s sleep.

At 2am she frantically messaged a nearby hair salon and pleaded for an appointment to sort it out.

Emily said: “I didn’t sleep properly, I kept waking up all night and I messaged a stylist at 2am saying ‘please can you fit me in tomorrow morning because you’re never going to believe it.

“When they asked what was up with it, I replied ‘What’s right with it? When I sit on the chair you’ll see’.

“Everybody’s eyes were popping out of their heads and their jaws were dropping, all the stylists were saying it’s the worst weave they’ve ever seen’.

“It took no longer than an hour to fix. She did it really nicely and then cut and styled it for me, I loved it.

“When the hairdresser got to the second row, that’s when she found the needle when it pricked her finger.

“She couldn’t believe it was there and said ‘what the hell? Where did that come from?’

“She [original hairdresser] caught my scalp with the needle tip and it hurt. It’s got a scab on it now so it must have bled.

“I remember thinking, ‘oh my god that could have stabbed me in the head all night.'”

After sending messages to the hairdresser for a refund and getting no reply, Emily wrote a Facebook post sharing her hair horror.

The woman got in touch and offered to fix Emily’s hair, something she declined.

Emily has since contacted the hairdresser’s boss and reported her to Trading Standards.

Emily said: “I shared the post because she was ignoring my messages.

“She sent me a voice note saying ‘I’m sure I’ve done a really bad job, I’ll come back on Wednesday to sort it out.

“I said I would be out and then asked her for a refund and she started kicking off.

“She then started saying she should have charged me £110, which is the standard price for all of those hair treatments, and offered to refund me £30.

“I contacted her boss who said a message would be passed on, but mentioned it happened outside of work and was nothing to do with them.

“I won’t be letting her do my hair again and I’ve contacted Trading Standards.

“I just want my money back, I also don’t want anyone else getting the same treatment.”